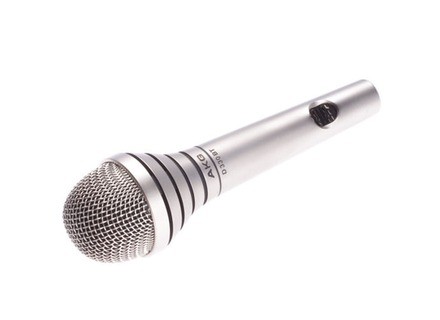 AKG 330 BT
4
Afficher la traduction automatique
Afficher l'avis original
This is a dynamic microphone made by AKG. This is probably one of the first AKG mics I've used that isn't a condenser microphone. It's actually pretty similar in style to a Shure SM58. It could just as easily be used as a live or studio mic as it's dynamic, as well as durable. Thus it's use increases quite a bit when you consider that for live purposes it could be used for just about anything. Plus, it'll only be used for loud instruments as it won't pick up anything too quiet.

When it comes to the studio, I personally like using this microphone as a snare drum mic, which is definitely how I've used it most. It provides a bright, poppy sound to the snare that is similar to a SM57 but not quite exactly like it. It certainly isn't as bright as a small diaphragm condenser would be, but I'll definitely compare it to many of the other dynamic mics. I've tried it on other instruments as well, namely guitar amps which have given me some great results. While I'd hardly say its my first choice for guitars, I'd definitely use it if I had to, no problem.
In live situations, the uses of this thing are more varied. As condenser mics aren't really as much of an option in the live spectrum, I'd say that you end up having to use dynamic mics more anyway. As such, you can still use it on snares and guitar amps, but also on vocals or horns as well. Horns especially work well in live situations with this.
Overall, this is a pretty great sounding mic. While I don't think it's up their with my favorites, I'd certainly use it in tandem with my other favorites like the SM57 or the D112 or whatever. I don't know what it costs nowadays, I've used it in the studio (this mic is owned by the studio) and with my manager in live situations. I don't imagine it costs too much more than he paid for it, even though it is discontinued. It's not good enough to be a collector's item now that it's out of production, but I'd say that it's definitely a good mic to get if you can find it cheap.
Ceci est un microphone dynamique faite par AKG. C'est probablement l'un des micros AKG première fois que j'ai utilisé qui n'est pas un microphone à condensateur. C'est en fait assez similaire au style d'un Shure SM58. Il pourrait tout aussi bien être utilisé comme un micro en direct ou en studio comme il est dynamique, ainsi que durables. Ainsi c'est l'utilisation augmente un peu quand on considère que des fins de direct il pourrait être utilisé pour n'importe quoi. De plus, il va être utilisé uniquement pour des instruments fort que ce ne sera pas ramasser quelque chose de trop calme.