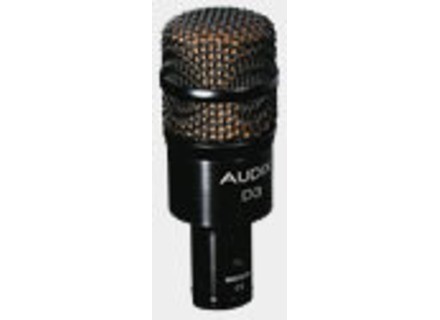 Audix D3
4
Afficher la traduction automatique
Afficher l'avis original
The Audix D3 is a dynamic moving coil mic from Audix's D line of mics. It doesn't require any phantom power. The mic has a cardioid pickup pattern which is not switchable. It doesn't have an attenuation pad switch. This will connect to your mixer with an XLR cable. Some people like to use these on rack tom drums, but I feel the better application for this mic is guitar cabinets and brass instruments. You could definitely use this live, since the cardioid pickup pattern will help to reject off axis noise. The sound quality is good enough that you could comfortably use it in the studio as well. The transient reproduction on this mic tends to be a little bit lacking, which makes it less suited to record drums which are all about transients. Brass instruments and electric guitars are a lot more forgiving in that category, and in some cases can be made to sound smoother with slower transients, so that's why I recommend this &quot;drum&quot; mic for these other sources.

Audix D3
4
Afficher la traduction automatique
Afficher l'avis original
The Audix D3 microphone is a dynamic mic that is great for use either in the studio or on the stage. I have only used it in the studio, but have heard and seen it used for live shows. Simply, it is a great option for micing drums in either scenario.

I’ve been using the Audix D3 dynamic mic for about three years and I have found it to be a useful microphone mostly while recording drums, among other uses. It is a small microphone, so it can be placed on a tom tom or snare drum without any fear that the drummer will hit it with their stick. Since it is small, it makes it easy to place anywhere without getting in the way. For this reason, it works great when micing up a drum kit for a live show. The sound quality is pretty good, even if it is not the most versatile mic in the world. It is great at what is does, like the other Audix microphones in the ‘D’ series. While I like the D4 better than the D3, the D3 is a great mic to have in any collection as it gives you options. While it definitely wouldn’t be my first choice, it is effective when recording electric guitar, as well as the aforementioned tom tom and snare drums. The price of the Audix D3 is quite reasonable and is definitely on the lower end of price range. This makes it a great choice for home studio owners, or for small clubs who want a big sound on a budget. While I’d rather record any drums with a Sennhesier MD 421 over the Audix D3, the D3 is a good mic that will cost less than half than the MD 421. Overall, highly recommended to both home studio owners and professionals alike.
Le microphone Audix D3 est un micro dynamique qui est idéal pour une utilisation soit en studio ou sur scène. Je l'ai seulement utilisé dans le studio, mais qui ont entendu et vu utilisé pour des spectacles en direct. Simplement, c'est une excellente option pour micing tambours dans les deux scénarios.

Audix D3
5
Afficher la traduction automatique
Afficher l'avis original
The Audix D3 is a microphone developed by Audix, to be part of the line of microphones that are meant to handle high sound pressure level applications. The Audix D3 is actually intended to be used on percussion, with its low profile, it is able to be put on toms very effectively, and it delivers quite a bit of a punch. The Audix D3 has a hypercardioid pickup pattern, and boasts quite an impressive frequency response from 50 Hz all the way up to 19,000 Hz. This is surprising, considering that the profile of the microphone clearly states that it is intended for use on drums. Generally, high frequency information is not needed on drums, but this high range extension has given the D3 a certain amount of crunch to it, which I will mention later. The D3 is capable of handling sound pressure levels of all the way up to 144 dB, and weighs in at nothing more than just over a quarter of a pound. It is also just under four inches in length. This keeps the microphone out of the way for a drummer. However, if the drummer does manage to strike the microphone, it is likely that the microphone will continue to function.

What is especially fantastic about the Audix D3 is the fact that the microphone is so good at micing up a guitar amp. The fact that this microphone can handle both high frequency capture and enormous amounts of SPL, combined with the response that boosts low mids and presence peaks at transition points between frequency classification ranges at 2,750 Hz, 5,000 Hz, and 10,000 Hz, gives the microphone a great amount of definition that its successor the Audix D4 seems to oddly lack.