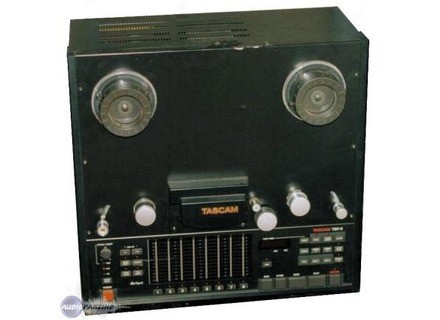 Tascam TSR-8
4
Afficher la traduction automatique
Afficher l'avis original
The Tascam TSR-8 is an eight multitrack recorder that records on 1/2" tape at 15 ips. It uses 1.5 mm thick tape and is set up for tape like Quantegy 456. Although Quantegy 456 is no longer being produced, it is equivalent to RMGI (Emtec) SM 911. RMGI SM 468 will also work on it just fine. This recorder features dbx Type I noise reduction, and although not necessary for recording on a tape machine with this size track width, it is very useful. The recorder features RCA ins and outs for each track and the ability to connect a Tascam MIDIizer, a device that can synchronize recorders through the Accessory 2 jack. The tape machines that can be synchronized include the MSR-15, MSR-24, the 238, and the 688. There is a remote control available for controlling the tape transport, recording and playback of each track, and setting up punch-in recordings.

This machine makes good sounding recordings, but I had already owned a Tascam MSR-16. I thought that with approximately twice the track width per track as the 1/2" 16 track MSR-16 that my recordings would sound much better. They didn't sound really any different when using the noise reduction. The TSR can record without noise reduction, whereas the MSR is too noisy to do this. I was surprised that there really was no perceivable difference in recording quality between the two machines. For me, having the additional 8 tracks is a no brainer since the recordings sound the same.