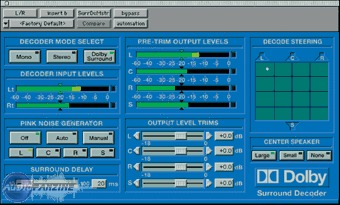 (contenu en anglais)
Afficher la traduction automatique
Afficher l'avis original
Dolby Surround Tools is a plug-in suite designed for helping you mix to surround sound. This is the only software of it's kind that I'm aware of, and it's nice that it comes from the real deal in Dolby. The studio I work at now has this installed on all of our systems, although I wasn't involved with installing it. I've only messed around a little bit with the software, as it's definitely designed for a specific use and it isn't something that I'm usually involved with. We do get some post production work happening in our rooms every now and again, and that's why we have this plug-in. There's not too much of a learning curve with the software, which is definitely a nice upside to it as you would think something like this might be harder to learn how to use. I don't believe a manual is necessary for this reason, but it still can't hurt to have it available.

The studio has the Dolby Surround Tools software running on a few of our systems, but I've only used it in one of the rooms. Not all of the rooms are set up for surround sound mixing, as only two of them have the capability to be turned into a room with this ability. The computer we're running it on is an Apple PowerPC G5 that has 8.5 GB of RAM and dual 2.3 Ghz processors. It's a Pro Tools HD system, so I can't say I've ever had a problem running it, although I've only used it on a handful of occasions.