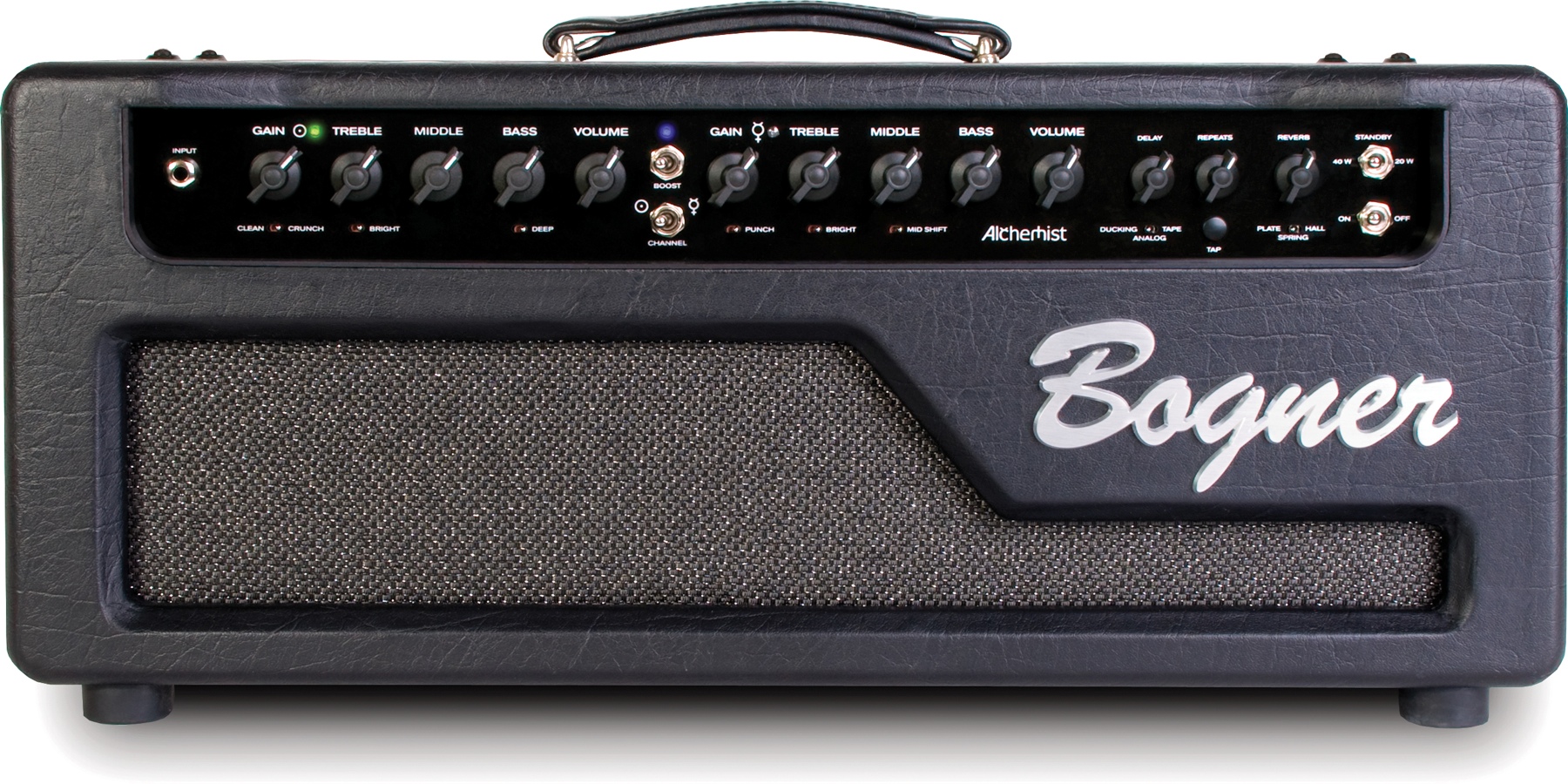 (contenu en anglais)
Afficher la traduction automatique
Afficher l'avis original
Reinhold Bogner established himself as a guitar amplification genius with the introduction of the Ecstasy in the early 90's. Throughout the years, with the introduction of models such as the Shiva, Uberschall, and Duende, Bogner has continued his legacy of ground-breaking tones that have found themselves mainstays in countless rigs such as Jerry Cantrell, Mark Tremonti, Synyster Gates, Rusty Cooley, and Tony Rombola.

The one caveat of the Bogner sound was the price at which it could be had. Bogner was and still mostly is, a boutique shop where amps are turned out in relatively small numbers, and as a result, are quite pricey.

So, in perhaps recognizing this, Bogner introduced the Alchemist model. Designed in Bogner's L.A. Headquarters and precision manufactured overseas, the Alchemist makes the Bogner name and voice available to a much wider spectrum of players.

The Alchemist head produces 40 watts via two 6L6GC power tubes, and voiced via 5 12AX7A preamp valves. In addition, Bogner saw fit to include onboard Reverb and Delay, which are both digital and settable to different types of each effect and controllable via included 4-button Footswitch

Fit and finish of the Alchemist are excellent without being overly polished or smooth. It's beautiful but functional. The pots are all high-friction, making the knobs turn smoothly and slowly, and stay where you set them.

A myriad of switches exist on the front panel, allowing the user to toggle such things as clean or crunch mode on the Gold channel, bright or normal topend response, deep or tight lowend response, boost (for soloing), and on the Mercury channel: Punch, Mid shift, and Bright.

There are also panel-switches for Delay and Reverb, to toggle between types of Delay, and types of reverb. Another nifty feature is a built-in tap-tempo button for the Delay right on the front panel.

Both channels have Gain, Treble, Middle, Bass, and Volume controls.

On the rear panel, there's a Parallel effects loop with adjustable level. The Loop is not completely lossless, but close enough where most users will find it plenty usable. There's also 3 speaker outputs, and an XLR-style jack for the included footswitch.

The Footswitch is reasonably sturdy, and is connected via detachable XLR cable, which is nice as you can substitute one of shorter or longer length depending on your needs. The Footswitch controls Channel select, Boost on/off, Delay on/off, and Reverb on/off.

The clean tones in the Alchemist alone are worth the price of this amp. They are tremendously sparkly, balanced, and smooth. The signature Bogner clean is a tone I think is greatly overlooked when it comes to Bogner amps. The clean maintains throughout the range of the Gain control up until the very highest setting, at which the clean becomes ever-so-slightly overdriven. The overdrive tones lie in the Crunch mode. Here, a very smooth, classic Plexi style overdrive is displayed, with plenty of touch sensitivity and clean sustain reminiscent of a JTM45. Great tones exist regardless of mode switch positions. The Alchemist is never bright or brittle or boomy.

The Mercury channel brings the crunch, displaying harmonically rich, punchy distortion in true Bogner style. The only thing this channel, and the Alchemist in general, doesn't do is the face-melting signature high gain tones found in Bogner's Uberschall and Ectasy series.

Nevertheless, there is quite a lot of gain on tap, and more can be had with a simple overdrive pedal boosting the front end. The Mercury channel's response is fast and smooth, making for inspiring solo work.

The Delay is a very usable, high quality digital delay, with switchable flavors of Ducking Delay (a delay that drops in volume when there is a strong fundamental signal, and increases as the fundamental signal fades), Analog, and Tape Reel (which is more accurately described as echo). All three Delay styles sound great and will no doubt be enough to cover a variety of delay tastes. I preferred the Analog delay for most applications.

The Reverb also has switchable modes between Plate (a style of reverb that uses a vibrating transducer to transfer vibrations to a sheet of metal), Spring (the kind of reverb most are familiar with in guitar amps), and Hall reverb, which mimics natural acoustics of a long room. All 3 modes are excellently reproduced via the digital module in the Alchemist. My favorite was the Spring reverb.

The Bogner Alchemist represents what can be achieved when great design is married with lowered production costs and attention to quality-control. Bogner endeavored to succeed where others had failed in the chinese-built tube amp, and to this end they truly did a great job. It's no wonder that the Alchemist has made it into the professional touring rig of a few top acts. The only thing arguably missing from the Alchemist is more gain, and I wouldn't be surprised if we see an updated revision to the Alchemist in the future with just that, and if/when it happens, I'll be sure to pick one up.
Reinhold Bogner s&#39;est imposé comme un génie amplification guitare avec l&#39;introduction de l&#39;ecstasy au début des années 90. Au fil des années, avec l&#39;introduction de modèles tels que la Shiva, Uberschall et Duende, Bogner a continué son héritage de révolutionnaires tons qui ont trouvé eux-mêmes piliers dans d&#39;innombrables plates-formes telles que Jerry Cantrell, Mark Tremonti, Synyster Gates, Rusty Cooley , et Tony Rombola.

(contenu en anglais)
Afficher la traduction automatique
Afficher l'avis original
6L6 tubes. Wattage control. 2 channels. Effects on board. Not a super complicated amp except for the whole effects thing. It does have a lot of voicing switches though. Also has a boost. Par for the course for Bogner.

Now let me go ahead and say, I had this amp for 2 weeks before I returned it. It's not uncommon for me to return amps but I really felt strongly about this one. I was using it with a Les Paul classic (BKP installed) and a Bogner 2x12. The manual is actually pretty good about explaining what the controls do although it's not the best manual I've ever seen. To be honest most people won't need the manual because most of the switches are self explanatory. The effects are a little tricky but honestly I didn't use them much at all because they sounded awful to me. The reverb is okay and all the other effects are just trash to be blunt.

The Gold channel is, in my opinion, not up to par. It seems like it can't decide whether it wants to be clean or crunch. Switching the modes about doesn't do much to my ears. It either sounds really sterile on clean mode or really weak on crunch mode. It's kind of a jack of all trades master of none channel. The mercury channel is okay, and it kind of resembles my Shiva lead channel at times. The bright and mid shift controls throw it out of wack and I don't mess with these. It still doesn't nail that Bogner "woody" gain sound but it gets close.

This isn't a particularly useful amp even for the somewhat reasonable price. The first channel I think is borderline awful, and the decent to good lead channel isn't worth the price. The effects are also not very impressive. In the amp's defense I felt it was a reliable piece of equipment but I only had it two weeks. Thanks but I'll keep my Ecstacy.
Tubes 6L6. Puissance de contrôle. 2 canaux. Effets sur la planche. Pas un super-Ampère compliquées, sauf pour le tout d'effets. Il possède un grand nombre de commutateurs expriment bien. A également un coup de pouce. Par du terrain pour le Bogner.

(contenu en anglais)
Afficher la traduction automatique
Afficher l'avis original
This is an amp that is one of those insane money making amps for Bogner. These amps while designed here in the US are made over in Chine. This keeps the price cheaper and certainly the quality cheaper and they slap them into every major big box music supply store around the world.

The amp was pretty easy to figure out. It didn't take me very long to get the best tone I could get from it, but for me the amp was very lacking overall. I never played it in a band setting so I am not sure how well it would cut in the mix, but the tone was not that pleasing to the ear.

I used a Gibson Les Paul with the amp. It was a '59 VOS which was very nice and sounded great but it just couldn't get this amp to sound the way I wanted or thought a Bogner should sound like. I understand that this is on the low end for Bogners and I believe that these amps are made in China which is a big disappointment too.

At new these amps come in at around $899. Not overly expensive but not worth the money either. Nothing about this amp made me feel like I was using a Bogner. I love the Twin Jet's and the XTC's but this amp just blew. It felt and sounded cheap. I couldn't dial out the cheap sound or feel to it. I would not recommend this amp to anyone. I would save up for one of the amps I mentioned above. Yes they are a lot more expensive but well worth it in the long run.
C'est un ampli qui est un de ces fous de l'argent faisant ampères pour Bogner. Ces amplificateurs conçus tout ici aux Etats-Unis sont fabriqués en Chine plus. Cela permet de maintenir le prix moins cher et certainement la qualité moins chers et ils les gifler dans chaque grand magasin à grande surface d'alimentation de musique du monde entier.