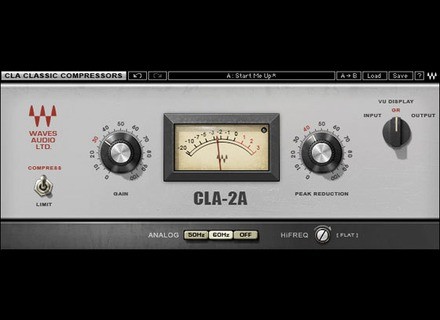 Waves CLA-2A
4
Afficher la traduction automatique
Afficher l'avis original
The CLA-2A is a software plug-in to be used in a DAW. It digitally emulates the processing of the famous LA-2A compressor.
Waves plug-ins are easy to install. You just download it off their webpage, then authorize it using a USB stick as a dongle, or using a software application if you computer connects to the internet.
Waves plug-ins are stable. I have never had any problems with bugs or anything like that.

This is the easiest compressor I have ever used (Waves Ren Axx is a close second). Essentially there are just two knobs. The knob on the right is used to control the gain reduction (i.e. how much amplitude of the signal gets compressed). The knob on the left is used to control the overall volume of the output signal. There are no controls for attack/release/knee/etc. Basically, all these settings are fixed and set internally. It is worth noting that the attack and release of this compressor are not very fast (especially compare to an 1176). Therefore, it is typically used for things like vocals, bass, and guitars. Using this compressor with drums can be tricky because it has the slow attack time. One popular technique is to use an 1176 first with fast attack and fast release to control the transients, followed by an LA-2A to control the sustain of the drums. Another good thing to do it to use the side-chain HPF to cut the low frequencies of a bass drum.

The LA-2A compressor is famous for 'smoothing' out audio tracks. If you can spend the money to buy a hardware version, more power to you. For the rest of us, we can be glad that many software companies are digitally modeling the signal processing. I own several modeled versions of the LA-2A (Waves CLA-2A, BF-2A, NI/Softube VC 2A, Line 6 Tube Comp). I definitely like the sound of the Waves version the best. I would like to see them include the feature of parallel inject/mix on an update version of all the CLA compressors.
The LA-2A is an essential signal processor for any studio. I definitely wouldn't want to try to mix without it. With that being said, it would be a great idea to buy this plug-in as part of the CLA compressors bundle because the 1176 is also essential.
Le CLA-2A est un logiciel plug-in pour être utilisé dans une application DAW. Il émule numériquement le traitement de la célèbre LA-2A compresseur.
Waves Plug-ins sont faciles à installer. Vous venez de télécharger de leur site web, puis autoriser l'aide d'une clé USB comme une clé, ou en utilisant un logiciel si votre ordinateur se connecte à Internet.
Waves Plug-ins sont stables. Je n'ai jamais eu de problèmes avec les insectes ou quelque chose comme ça.

Waves CLA-2A
4
Afficher la traduction automatique
Afficher l'avis original
The Waves Ltd. CLA-2A is a compressor/limiter plug-in that is part of the Waves Classic Compressors bundle. The CLA-2A is modeled after the classic Teletronix/Universal Audio LA-2A compressor that has been used on so many different recordings over the years and is known as one of the best compressors out there. I'm not sure if you can purchase this plug-in individually or if it's only available in the bundle, as I've got the full Waves bundle that contains this plug-in. Installing it and all that is really simple and not unlike installing any other software, so as long as you have a properly compatible system to run it on, I can't foresee users having any installation problems. The interface of the CLA-2A is a dead match for the original LA-2A, as it's got the same exact make up. Even if you aren't familiar with an LA-2A's make up, which is the simplest of all compressors, you'll be able to figure out this one on your own without the help of a manual. The only parameters that it has are for gain (make up) and peak reduction (compression), as well as a switch to use it as either a limiter or a compressor.

Right now I'm running the Waves Ltd. CLA-2A and the Classic Compressor in Pro Tools LE 8 on my home recording rig. I'm running the software on a Mac Book Pro that has a 2.2 Ghz Intel Core 2 Duo processor and 4 GB of RAM, along with a Digi 002R audio interface for Pro Tools and a set of Adam A7 monitors for listening. This configuration has been able to handle a good work load, and the CLA-2A hasn't presented it with any performance issues thus far. I also haven't had a need to run more than one or two of them at a time, as this isn't a great all purpose compressor in my opinion.