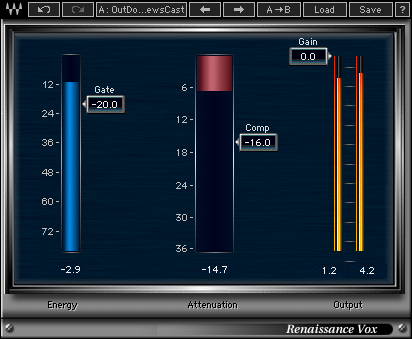 (contenu en anglais)
Afficher la traduction automatique
Afficher l'avis original
The Waves Ltd. Renaissance Vox is a vocal compression plug-in that comes with a variety of different Waves bundles, but not as an individual plug-in as far as I know. I've got the full bundle of Waves plug-ins at home and have also used this plug-in at the studio where I work since I do a lot of going back and forth between home and the studio. I installed the plug-in along with the rest of the Renaissance plug-ins and the full set of Waves plugs. It should be a quick and easy process, as virtually every DAW will be compatible here. Learning the plug-in is also pretty easy if you understand the basics behind using a compressor/limiter/gate. The parameters that it gives you to work with here are for gate threshold, compression amount, and gain make up. Each also has it's own corresponding meter. It's super simple to use, so it would even be a good place to start for those who are just getting into using compression. It's included in some of the cheapest bundles that Waves has to offer as well. A manual shouldn't be necessary with Renaissance Vox.

I've currently got the Waves Ltd. Renaissance Vox plug-in running in Pro Tools 9 on my system at home. I just upgraded to Pro Tools 9, which I can run as a standalone piece of software or with my Digi 002R audio interface. The computer I'm running everything on is a Mac Book Pro that has a 2.2 Ghz Intel Core 2 Duo processor and 4 GB of RAM. This has definitely been an adequate system for me to run this plug-in on, as I've yet to have any issues with performance with it.

(contenu en anglais)
Afficher la traduction automatique
Afficher l'avis original
I'll be up front about this in that I don't use this plugin too often given that I'm a death metal guitarist. When I do vocals, it's mostly guttural stuff with tons of compression and gain boosts. However, I do some 80s metal and even rock in my spare time. Doing clean vocals takes quite a bit of effort, and for them to sound "alive" takes a good amount of processing. Too many times have I had someone record a great take only for it to not sit in the mix nicely. I've used this plugin very successfully on those vocals to help add some dynamics and give them that sparkle they needed to sit nicely. The plugin is basically a compressor, gate, limiter, maximizer, etc. in one. It's very simple to use and has only a few sliders -- gate, comp and gain. By adjusting these three sliders, you can get some great vocal mixes without having to spend hours and hours processing them.

Waves is the king when it comes to things like stability and performance. They're almost unbeatable in this category. I've never experienced a single crash or hiccup while using this plugin inside of my favorite DAW -- Logic Pro. The plugin is cross compatible, and that means that almost every user out there should be able to utilize this plugin on their favorite machine. It also doesn't take up too much RAM or processing power, which is a huge plus. There is one issue I have experienced, however. The plugin itself is a 32 bit plugin. I run a 64 bit DAW, and it can be a real pain because Logic Pro has to run a special bridge application to utilize this inside the 64 bit workspace. I'm hoping they'll update this plugin later down the road to work in 64 bit environments natively. I've been using the Mercury bundle for about half a year now, and I'm loving every minute of it.