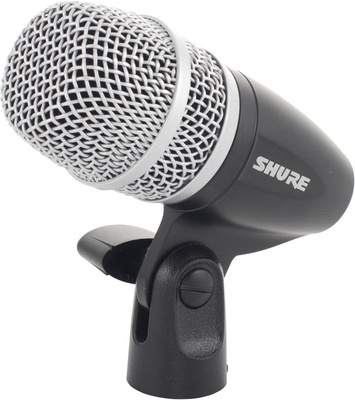 (contenu en anglais)
Afficher la traduction automatique
Afficher l'avis original
The Shure PG56 is an affordable kick and tom microphone, and when I say affordable I mean affordable! It is a Cardoid Dynamic microphone that only cost 69 dollars. I have not seen a kick drum or tom microphone that cheap in a long time. I have had this microphone since 2007, in fact it was one of the first kick drum microphones that I purchased for my own home studio because I couldn’t afford a more expensive one at the time. It comes with a solid mounting system that is well built and wont fall off your drums, the PG56 itself is a smaller microphone and you could probably even hook it up without the drummer even knowing that it is on the kick or toms. It does come with a 15 foot cable which isn’t a very good one and should be replaced if you purchase this microphone. The PG 56 is made for close proximity to your drum or source.

I love how small this microphone is, and if you are not use to drumming while having a microphone attached it can always be a bit different especially with your toms and snare, but the Shure PG 56 is already so small it will not matter if you know its there or not, you wont knock it off. I am still happy that I own this microphone even though I don’t really use it much anymore. It is still good to have just to travel with because of its size and the price of it keeps me worry free from it getting broken or stolen while we are out recording somewhere else. For the price you really can beat what you get with the Shure PG 56. It is well worth the 69 dollars to buy it, especially if you are just getting started with recording drums. It will be a great first drum microphone for you to record with from home.

(contenu en anglais)
Afficher la traduction automatique
Afficher l'avis original
The Shure PG56 is an impressively small microphone designed specifically with drums in mind. It is a direct alternative to the SM57's, and often, the PG56 works better due to its small size. Once, a drummer came in and had no idea that he was being mic'ed because the PG56 microphones were so well hidden all around the drum set. Its size also betrays its image of durability. The Shure PG56 is a nastily rugged microphone, so wild drummers who still manage to hit the ridiculously small PG56 microphones on their toms are not going to blow it up like they may blow up an SM57. Don't get me wrong; the SM57 is pretty rugged. The PG56 microphones, are, simply by design, more safe from the abuses of a fast traveling stick of wood. And this thicker grill and padding make the PG56 pretty resistant to extremely high SPL levels. This is nothing I think anyone should be terribly impressed by, considering the fact that it is a dedicated drum microphone and this feature is a requirement of them.