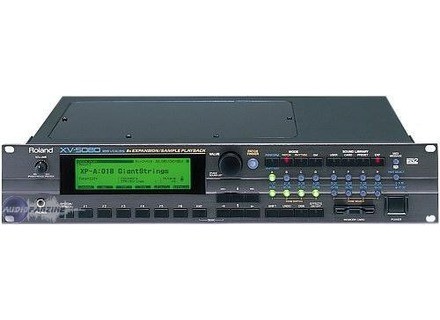 Roland XV-5080
5
Afficher la traduction automatique
Afficher l'avis original
No. There is nothing missing from this piece. Anyone who complains that it has &quot;no arpeggiator&quot; needs to find something else to complain about...

It is NOT easy to use. It took me about three weeks to figure out many of its finer points. But like most Roland gear, investing the time is well worth it.

It is a worthy piece.

Well, it is a Roland. The sounds are pretty incredible. I use mostly the piano, strings, and drums -- all the SRX boards.

I really like this thing a lot. In fact, I traded my Korg Triton Rack in -- but I will probably never sell the Roland. I just love the fact that it was the last and greatest-ever Roland piece that looks like it -- the two-space, black-metallic box with a big-old LCD on the left upper corner. This look dates back to the MKS-80 and the ensuing JV series. It seems to me as though the 5080 offers the culmination of everything that Roland ever did, throughout the 70s, 80s, and 90s. Although it is truly a sample box and not a true synth, with 128 voices of polyphony, who cares? You can create anything with the XV engine that you can do with their older analog stuff.

Roland XV-5080
5
Afficher la traduction automatique
Afficher l'avis original
This is an amazing workhorse of a synth. The only gripe I have is 3 master effects. Thats why I've not given it a 10 as I'd like to have seen maybe 5 master effects....

Full marks - I found this a very intuitive module. Now I have an editor for this beast I'm in heaven. Manual gives good insights.

Good build quality - if I was gigging I'd get this racked in a shock-proof case. Nothing has broken but I did have a problem updating my operating software on it as I had a power cut. Luckily I reapplied the update and everything worked again. Just at the same time a help response came from Roland - same day !

Sound quality is Immense. Stereo partials - amazing. I love playing this module with a velocity sensitive keyboard with aftertouch. Everything is pristine, great detail. Guitars, strings and pads, drums - everything in usual Roland warmth.

My girlfriend sits in a rack now and the 5080 sleeps with me.

Roland XV-5080
5
Afficher la traduction automatique
Afficher l'avis original
I can't really say that there's anything missing that I'd need, but I've yet to find a decent easy-to-use PC based editor for the module.

I haven't read the manual too much, as it's pretty difficult to understand. This is standard for Roland manuals though (unfortunately). Still, the unit is relatively easy to figure out without a manual. I purchased the XV5080 over the XV3080 for a few reasons, one of which was the interface. Having been spoiled by the interface on the Korg Triton, I was drawn the larger display on the front panel of the XV5080, which makes things FAR easier to program and understand. I'm a guy who has 2 x 19&quot; monitors in the studio, so the bigger the screen is, the better!! For beginners, it's very easy to scroll through patches and understand the basic functions. Things get a little more difficult to understand when you dig deeper, but I've never gotten lost or stuck in the interface. It's not the most elegant or graceful, mind you, but it does the job nicely.

Roland has continued its JV/XP range in this new series (the XV5080, XV3080 and XV5050). Most of the waveforms have been recycled from the former modules, however, the patches and performances still hold up today as they did then. There are quite a few new waveforms, however, and the enhanced architecture (including 128 polyphpny) make the XV5080 a tough competitor to beat. The module caters to all styles of music, and there's something there for everyone. The only thing lacking, in my mind, is drums. The drums in the module are pretty pathetic compared to the rest of the pallette of sounds. Also, the relative volume of patches is completely skewed. Sometimes I'll have to turn up the volume 100% to get a decent level on a patch, other times, the level is WAY TOO LOUD (especially on the synth basses and other synth patches). However, this is fixed quickly in a multi-timbral setting with a simple MIDI volume message. There are 4 effects available in free configuration in Performance mode, which is a nice touch, as I often use it in the mode for writing. When I record, however, I will often revert to Patch mode to allow each part to have full use of the effects. The XV5080 has a sample-playback feature, but I have not yet used it.

The only time I ever had the XV5080 act up on me was when I was using it in multi-timbral (Performance) mode. It was making odd noises and telling me that the buffer was full. It turns out, however, that there was a MIDI loop between my MIDIMAN Thru 3x8, my sequencer and the XV5080. Disabling the &quot;Thru&quot; on my sequencer resolved the problem. The module is ROCK-SOLID, and I wouldn't think twice about taking it out to a gig. If you're running in the 64+ voices range, however, I've heard of some issues regarding MIDI timing. However, since I print my MIDI tracks to audio almost immediately after I've written them, I've had no problems whatsoever with MIDI timing.

I really like this module. Well, I might even LOVE this module. It has an incredible range of sounds on-board and unbelieveable room for expansion (via SRJV-80 and SRX expansion boards). It is my new #1 &quot;go-to&quot; module, and it comprises about 50% of my MIDI tracks. I'm sure it will have a home in my rack for a long time to come!