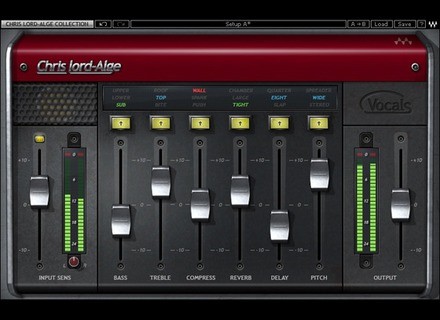 Waves CLA Vocals
4
Afficher la traduction automatique
Afficher l'avis original
CLA Vocals is part of the CLA bundle that Waves has to offer. These are plugins that were created by/for Chris Lord-Alge, the famous mixer who's done everything from Rocky IV to Slipknot. This plugin is great for those wanting to master your vocals. It has sliders for bass, treble, compress, reverb, delay, pitch, input and output. On top of that, there are small switches on top of each slider to adjust for different frequencies. To use this, you simply enable it on your vocal buss and start adjusting. I didn't experience any compatibility issues, so I can't comment on that. I never read the manual, but I don't think it's really necessary for these plugins. It's very easy and simple to use, so no issues there.

Waves CLA Vocals
5
Afficher la traduction automatique
Afficher l'avis original
The Waves Ltd. CLA Vocals plug-in is one of a bunch in the Chris Lord-Alge (CLA) bundle of plug-ins. Each is geared toward a particular instrument or application, with this one obviously focusing on vocals. I've got all of the Waves plug-ins on my system at home, which I installed all at once and didn't encounter any problems. As far as the interface of the plug-in goes, it shares the same sort of configuration as the others in the CLA bundle, with sliders for bass and treble control, compression, reverb, delay, and pitch. It also has independent control over input and output level. Each of the main effect sliders gives you three different modes to choose from as well. It's easy enough to use where I don't believe you'll need the help of a manual.

I'm currently running the Waves Ltd. CLA Vocals plug-in and the full CLA bundle on my system at home. My home studio is made up of Pro Tools LE 8 which I run with a Digi 002R audio interface, along with a Mac Book Pro lap top consisting of 4 GB of RAM and a 2.2 Ghz Intel Core 2 Duo processor. This system has been adequate for running this plug-in all the way, as I've yet to encounter any issues with it. I've only had a need to run one or two of them at once however.