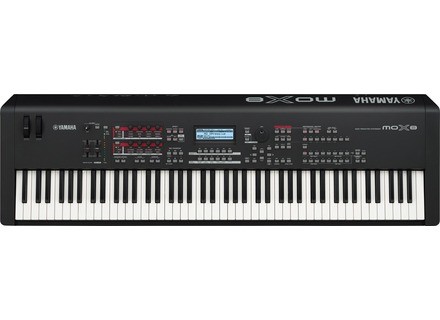 Yamaha MOX8
4
Afficher la traduction automatique
Afficher l'avis original
A studio that I go to frequently has the MOX8 there for us to work with. I always enjoy working with it though I would never go out and purchase it because of all of the boards that I have at home that are similar or better. The MOX8 was one of those workstations that I didn’t even have to see a manual to know how to work it because most all of the Yamaha’s boards are very similar with the way that they work and operate. So if you have used one of them you have pretty much used them all.

Using the MOX8 is not as complex as my Motif board at home, but the functionality of it is pretty much identical. All of the menus and options are pretty much the same and the general layout is the same, even the pitch and mod wheel feel the same. You will not need a manual to work with this workstation and it can easily be synched up with your DAW to be used as a VST.

The keys are touch sensitive and feel really good. The sounds are very good, especially the arps, I love the arps plus there are over 6 thousand different patterns that you can arp with which is more than any other board I think that I have ever used. Getting this full 88 key workstation to work with your PC or Mac is also very simple. I have used it on a Mac computer at the studio before and it was really easy to work with it as a VST.

Yamaha MOX8
5
Afficher la traduction automatique
Afficher l'avis original
The Yamaha MOX8 is a hammer action synth that has 88 keys. This is one of the best user friendly synth workstations that I have used. It has a built in interface with 4 in and 2 out inputs. There are over 6 thousand arpeggiator pattern presets on the Yamaha MOX8. It is very easy to find the sound that you are looking for on the Yamaha MOX8 because it has a category search option. Every since I have been using the Yamaha MOX8 I have noticed a spark in my creativity because this keyboard gives you so many options to control your sound. The Yamaha MOX8 has let me get the ideas that are in my head out easily.

Editing your sounds is simple, as long as you understand how to use the functions of the Yamaha MOX8. It could take you some time before you have a full grasp on how this keyboard operates. Understanding all of its functions and “tricks” don’t come quick, but once you got them down they will stick with you forever. All of the MO line of keyboard synths from Yamaha has pretty much the same set up so if you can work this keyboard you can work them all.

The sounds are amazing, all of the synths and brass are perfect. I have only found a few sounds on this keyboard that I didn’t like too much and most of them are basses. The bass is where I think Roland beats out Yamaha keyboard synths.