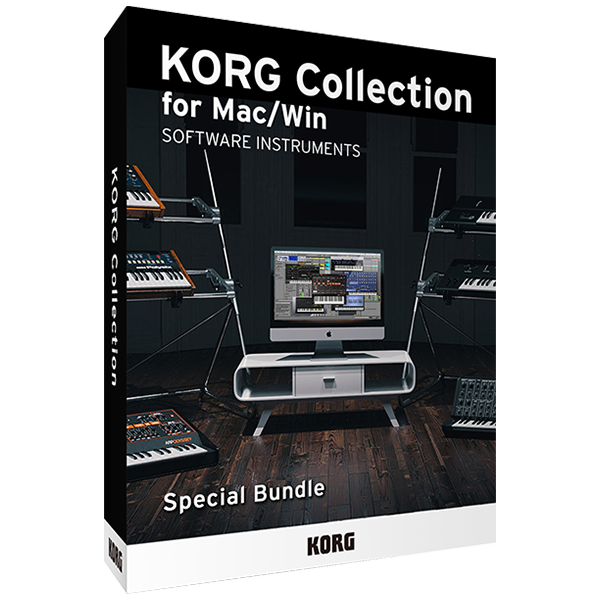 ARP ODYSSEY with 3 different filters originating from the different dates of production and the drive circuitry which were features of the hardware ARP ODYSSEY brought back by KORG. Voice Assign Mode which makes chord playing possible, an arpeggiator which can be minutely programmed as with a sequencer, and an effects unit which can bring variegated transformations to your sound. Also, you can switch between the three designs of ARP Odyssey which are different based on the date of production. In addition to the Rev3’s iconic black panel with orange silk-screening, you can get the Rev1’s white panel and the Rev2’s black panel with gold silk-screening.

MS-20: 32 voices of polyphony and up to 16-voice unison (with detune/spread function) were added. Flexible external modulation settings and MIDI clock synchronization have also been introduced

Polysix with enhancements such as 32-voice polyphony (max), up to 16-voice unison (with detune/ spread function), flexible external modulation settings, MIDI clock synchronization for the modulation generator and arpeggiator, and a spread function that adjusts the spaciousness of the effects.

Mono/Poly with enhancements such as 128-voice polyphony (max) with up to 16-voice unison, two integrated multi-effects, an eight-way virtual patching matrix. The virtual patch functionality lets you use 159 different modulation sources to modulate 35 different destinations.

M1 features filter resonance, VDA modulation, and master effects that have been powered up to a total of 18 systems. It provides all of the PCM, Program, and Combination data found in the original M1 and the M1EX internal PCM expansion, plus the PCM data and Program/Combination data from all nineteen optional ROM cards.What’s more, in addition to all 19 types of the PCM ROM cards for the M1, the sound of the M1EX which was released as an expansion of the M1’s built-in PCM, as well as the sounds of the T-series, which advanced the M1. It is equipped with extensive sounds, including 33,000 preset sounds and 34 cards.

WAVESTATION provides extensive preset programs and waveforms found on all of the series’ models: WAVESTATION, WAVESTATION EX, WAVESTATION A/D, and WAVESTATION SR. 7 types of PCM and program cards are equipped. In addition to a total of over 1,500 built-in preset sounds, an enormous amount of added PCM waveforms and wave sequences allows for even more varied gated sound production.

MDE-X multi-effect processor with 19 different effect programs carefully selected from KORG digital effects, including Compressor, Limiter, Overdrive, Equalizer (EQ), Talking Modulator, Flanger, Phaser, Chorus, Delay, and Reverb. The plug-in uses an effect algorithm derived from the high-quality TRITON family of synthesizers. Now you can use these effects that have defined the sound used in so many tracks in the software. Also, with 128 effect programs