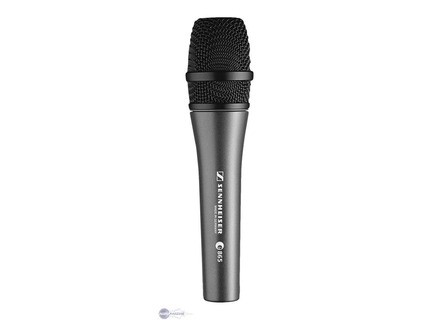 Sennheiser e 865
5
Afficher la traduction automatique
Afficher l'avis original
The Sennheiser E 865 is one of two stage condenser microphones available from Sennheiser. Knowing Sennheiser, they do not fool around, and even this microphone, the dramatically cheaper one of the two, the other being the Sennheiser E 965 for almost three times the price, is an almost prohibitive $270. The interesting thing about the high end live vocal microphone market is that every company generally has its own pacing and gradient on which they place their microphones, so it turns out that the E 865 is actually an incredibly cheap microphone considering what it turns out to be up against.

First off, the microphone is beautiful and inspiring to sing in. It is microphones like these and the Audio Technica Artist Elite microphones, among some of the very high end ones, that inspire the singer to give the performance of his or her life. The E 865 itself is a supercardioid, and unbelievably impressive at off axis rejection. Its frequency response is from 40-20,000 Hz and it has an impressive ability to handle SPL's up to 150 dB.

In use, the E 865 is very interesting. This is because something in the way its engineered preserves the strange squish of a dynamic, but not in a way that would be viewed as a disadvantage. It works well to tame all of the other renegade frequencies, and makes the microphone silk and/or butter to sing through.

I cannot truly compare it with any other microphone because there is no real stage vocal condenser as good as this around the same price. There is a Blue Encore for a little bit less, but compared to the 865, the Encore loses that "special" that I first felt for it.