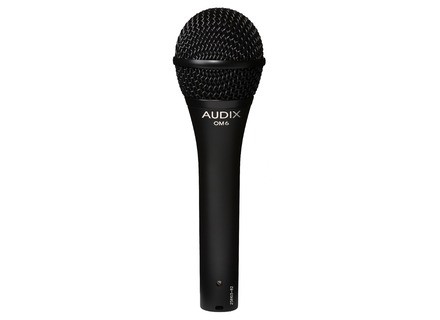 Audix OM6
4
Afficher la traduction automatique
Afficher l'avis original
The Audix OM6 was one of the first mics that I have ever used, I think I got it a radio shack. That is crazy that a mic this good was sold at radio shack a long time ago.
Sonically the response has a nice presence peak in the upper mid range, but the top end rolls off quickly after that. Opinion is split about whether that is a good or a bad thing – it helps keep a lid on feedback, but it doesnt sound as hi-fi as some other mics. I have had some singers complain that their vocal top end is not quite right - sometimes asking for more top end. I guess they are used to the sound of expensive condenser mics on their recordings. My solution is normally to give them another mic, like a Beta 58, or Beta 87a maybe, rather than use EQ. If you A/B test an OM6verses these mics it will always lose. But it can still be a better mic in some cases, such as when you are looking for a cardioid rather than hyper-cardioid response (the SM58 has a cardioid response, which means it has a wider pickup pattern at the front). But most vocalists will be more than happy with the sound the OM6 gives.

The OM6 also does a pretty good job on drums (not really bass drum), and other loud things like guitar cabs. It uses the same capsule as the SM57, one of the best mics for guitar cabs.

I've given other microphones in the same price range, (and even some that are pricier) an honest test drive, but I just keep coming back to my OM6. Some of the competitors have a lot more definition and are more sensitive, etc. - but to a fault. I can get right up on this mic and sing as loud as I can and it doesn't get harsh like my other mics do. So, until I find something I like better (and I doubt I will), I will keep on using my OM6.

Audix OM6
5
Afficher la traduction automatique
Afficher l'avis original
The Audix OM6 is a microphone designed to be a hand held microphone for vocal use. It is primarily a live microphone, and has a hypercardioid pick up pattern. It is a dynamic microphone that is fairly flat, but in designed to just have a gently rising frequency response between 2,000 Hz and 10,000 Hz. This presence peak brings out the vocals and helps them cut a bit more through a mix. This microphone's midrange boost is not at all significant. It is just a slightly rising response that adds a tight little color without feeling too saturated. This microphone is also touted as being great for group singing (not a group singing into one microphone, that is rather difficult with a hypercardioid microphone), with Audix proudly touting that the OM6 is what gave Crosby, Stills and Nash their "trademark vocal sound." Audix proudly announces the technology it puts into all of their OM series mics, with high handling capability of sound pressure levels, with the OM6 having the ability to handle 144 dB, a very low mass diaphragm for superior transient response; with the OM6, Audix claims that the sound is almost condenser like. Superb rejection due to its tight pickup pattern, and the anti feedback proprietary design. The body of the microphone itself is beautifully tapered and beautifully finished, and is a joy to hold. Audix also naturally claims that it is incredibly durable, and built to last a lifetime.

Audix OM6
5
Afficher la traduction automatique
Afficher l'avis original
The Audix OM6 is a hand held style dynamic microphone that can be used in just about any situation. I've personally only used it in a recording studio where I was the assistant engineering on the session. The OM6 has a hypercardioid polar pick up pattern, so it picks up sound best when a source goes directly head on into it. While I haven't used this for vocals during a live show, this is the perfect kind of microphone for that sort of use. The setting that I used it in was for a live recording session.

When using the Audix OM6, the main idea for us was to get a nice sounding vocal without it picking up too much surrounding sound since the singer was in the same room as the drummer and the rest of the band. This wasn't for the recording of an album, but for a live recording session, so the idea was more to get a vibe with everyone in the room rather than isolating everyone. We choose the Audix OM6 one day when we decided to start experimenting with the vocal microphone that we did for these sessions to see if anything else could work as well as the Electrovoice RE-20s that we were normally using to record vocals. The OM6 was around and seemed like a logical choice because of it's hand held nature and the fact that it is a hyper cardioid microphone that won't pick up unnecessary low or high end sound. While perhaps not as good for this application as the RE-20 was, the Audix OM6 got us a very good sound when run through a Neve 8108 console and a Tube Tech compressor. It wasn't as full sounding as the RE-20, but was definitely adequate and did a great job of isolating the vocal sound. Although a bit more expensive than other hand held microphones of this nature, the OM6 is definitely in another league as it sounds a lot better than most of them out there as well. If you're looking for a high quality vocal mic for studio live sessions or live shows, the Audix OM6 should definitely be on the list of mics to investigate.
Le OM6 Audix est un microphone à main de style dynamique qui peut être utilisé dans n'importe quelle situation. J'ai personnellement que c'est utilisé dans un studio d'enregistrement où j'ai été assistant de l'ingénierie de la session. Le OM6 a une polaire hypercardioïde ramasser modèle, de sorte qu'il capte les sons mieux quand une source est directement responsable sur le dedans. Bien que je n'ai pas utilisé ce chant pour les cours d'un spectacle, c'est le genre parfait du microphone pour ce genre d'utilisation. Le paramètre qui je l'ai utilisé dans le fut pour une session d'enregistrement en direct.