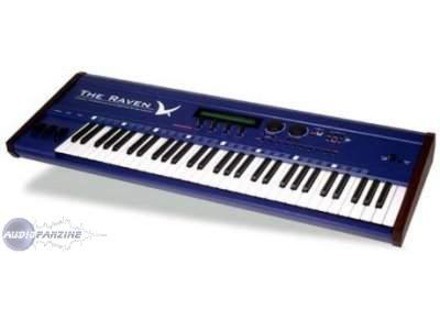 Quasimidi Raven
5
Really cool for techno players. Dancefloors will be trembling for sure. Weak sound adjusting. Could be more tracks and polyphony. Actually for techno music I use E-Synth. I've bought The Raven just for fun, but you'll save on money.

). I looked in SOunddiver but I still can't get under the hood. In conclusion: You have a tank of a keyboard with excellent action (fatar top of line keys like on K5000S and Roland A70, Emu sampling keyboards, etc.), you have Very good sounds (tons of great basses and drums and lots of full ambient moving sounds) despite that fact that you are short changed on the synthesis aspects. And you have 16 channel sound module, and live performance oriented 8 track pattern sequencer that allows you to roll your own sequences and make them act like superbeats on the E-mu line. The fact that there are 3200 phrases/motifs is great because they are so mix and matchable that you could come up with millions of combinations and never find one that was the same, and with using your own chosen sounds, it is unlikely that you will do what anyone else does. These layered in with your own motifs, make for setting up some sequences that would set you up for a nice live show with some other support in the form of musicians or another sequencer or a dj. Tap tempo button! The fun auto song buider is very nice too. If you get sick of the sounds (the drums are usable for ever)you can use external sound modules and still rock with live sequencing keyboard. I intent to give my Xtreme lead a spin on it. I traded my microwave XT for this and I feel very good about it. For what it is, for what it cost (now, ( I guess I could have got $850 tops for the XT) as opposed to then, when at nearly 2 grand plus 300 for the MAX it was too high) I have to give it top marks. Ravi

I've had the Raven-max for about 13 years now and I have to say this is one of my favorite synths.. Sure, the filters do suck, and the comment about the drums sounding limp, your fuc-ing crazy. They are some of the best I've heard!

If you make any type of electronic music, add this board to your collection. you will not be disappointed..
Solidly built like the best of the best analog synths from back , with an excellent semi-weighted synth action and nimble, extra long keys. The construction of the Raven should be the standard for any modern professional synthesizer.

the real beauty of the Raven is only realized when you play with it. The interface is best described as natural and intuitive, almost so you can play it in the dark, with your ear as the guide. I find it refreshing and fun to play something deep that isnt full of programming and menus for a change. This baby feels organic, and interactive, almost like its alive and actually jamming with you!!