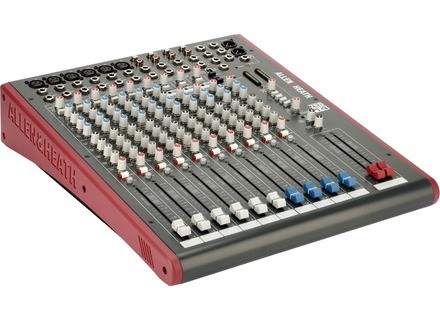 Allen & Heath ZED-14
5
Afficher la traduction automatique
Afficher l'avis original
The ZED-14 is a top-notch mixer, coming from one of the foremost mixer manufacturers in the world. All the XLR inputs can provide phantom power for microphones and the bus routing options are more complicated than can be explained here--suffice it to say that this mixer is FLEXIBLE. I have my main outputs routing to my main room amp and speakers and the AUX outputs running to a pair of desk studio monitors. As you'll find below the ZED14 also has USB connectivity so that it can act as both a mixer AND an audio interface!!

Each of the MONO channels has a 4-band EQ--high, low-mid, high-mid, low and the standard panning controls, gain, etc. The prominent mixer feature that sold me on the ZED-14 above other similar units is that the ZED-14 has sliders instead of knobs for each channel master--it's much more easy to see where everything is set. If you need on-board effects Allen & Heath makes the ZED14-FX which you can get for a little more cash.

The ZED-14 and has the feel of a professional mixing board, but won't take up your whole desk OR your whole paycheck. I have yet to find ANY mixer/console/interface of this professional quality for such a low price. If you are in the market for a home mixer to start home recording I would HIGHLY recommend this package. For the price, you get a professional-class mixing board, USB interface, and Cakewalk SONAR LE. If you can find a better deal, I'd be interested to hear about it.

I have a good amount of gear. When I try to record something I usually used to end up spending a non-trivial amount of time running cables, disconnecting and re-connecting equipment, etc. just to get something simple recorded. A friend of mine suggested that I should get a mixer to run everything once and just leave it connected and mix in as necessary to record.

I found many entry-level mixers but they all seemed to provide very little functionality and not really take into account the idea of the amateur musician who is doing home recording on a DAW. Then my local music store suggested I take a look at the Allen & Heath ZED-14 mixer they had in stock. It was larger than I had in mind, but it had the multiple I/O options I would need and looked well-built (let's not forget this is Allen & Heath).

The winning blow, however, came when they explained to me that this mixer/console has a USB connection for connecting to a DAW. WHOA!! This mixer can actually act as your interface for recording!! I took it home and plugged it into my DAW. Sure enough, SONAR recognized the ZED-14 as a "USB Recording Device." I could now hook up my drum machine, multiple microphones, and amp outputs all to the ZED-14 and LEAVE THEM CONNECTED. When I wanted to record a specific part, I just muted all other inputs and just recorded the specific channels that I wanted and sent them straight to SONAR via USB--no additional interface required. How cool is that!?!?!? The ZED-14 even comes with a copy of Cakewalk SONAR LE if you don't have any recording software--BRILLIANT!!

This is one piece of gear that is really well-thought-out. Allen & Heath truly considered the needs of the home recorder when designing this mixer. The fact that you can plug the mixer into your computer/DAW via USB 2.0 is a HUGE step forward for home recording--no more sending your mixer output to another interface that may color the tone in a way that is undesirable.

The ZED-14 is dead-quiet. I have other smaller mixers and audio interfaces and all of them seem to generate SOME noise or color the sound in some way. Not so with the ZED-14. I have to keep reminding myself that although I only paid a relatively small amount for the ZED-14, it IS after all an Allen & Heath and it shows in the quality of the sound. The faders are well-tapered as are all of the EQ controls; no, "It's on one or ten" here.

When I went looking I honestly didn't think that I would get such a magnificent piece of equipment for what little I paid. I figured to get a mixer of this caliber I would have to approach the thousand-dollar mark. To find that a mixer of this quality exists with all of the on-board mixing capabilities plus the ability to use it as an interface for a DAW is an incredible bonus. I've looked around at other mixing consoles and thus far I've found nothing that can compare to the ZED-14, especially when they throw in a copy of SONAR LE. This would be an easy choice even if the ZED-14 were near double the price. Lucky for us it's not. Try one and see for yourself.
Le ZED-14 est un mélangeur de qualité supérieure, provenant de l'un des fabricants de mixage avant tout dans le monde. Toutes les entrées XLR peut fournir une alimentation fantôme pour les micros et les options de routage de bus sont plus complexes que ce qui peut être expliqué ici - il suffit de dire que ce mélangeur est flexible. J'ai mes sorties principales de routage à mon ampli et haut-parleurs pièce principale et les sorties AUX fonctionnant à une paire de moniteurs de studio bureau. Comme vous le verrez ci-dessous la ZED14 a également la connectivité USB pour qu'il puisse agir à la fois comme un mélangeur et une interface audio!