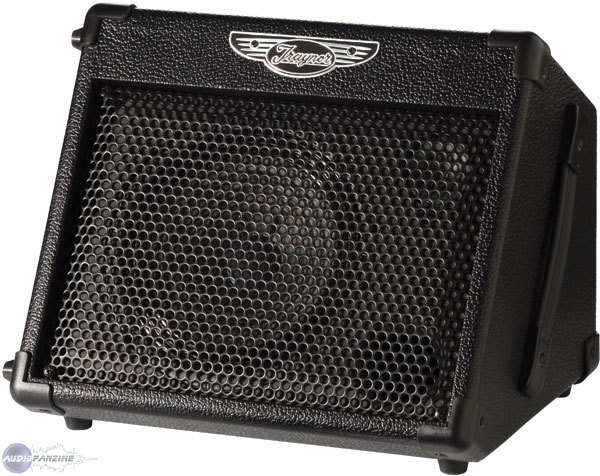 (contenu en anglais)
Afficher la traduction automatique
Afficher l'avis original
The Traynor TVM10 is a small battery powered amplifier built by Canadian company Traynor Amplfication. It is solid state and puts out about 10 watts of power. It's designed to be able to handle guitar, microphone or CD/MP3 inputs and run for extended periods of time for great tones even at high volumes. There are two separate channels, each with their own input and volume control. They each share a four band EQ which has bass, low midrange, high midrange, and treble. There is also auxiliary inputs as well as a 1/4" headphone jack.

Getting a good sound out of this amp is surprisingly easy. It's only got the two channels each with just a volume control and the four band EQ for dialing in tones. However that doesn't stop the amp from sounding really, really good. I was actually shocked the first time I plugged into it. The interface is easy enough to dial in which is great. The extra control afforded by the separate midrange controls really helps out a lot as well. There's no onboard overdrive or effects like reverb or delay so you're left having to use pedals if you want versatility. However the core tones out of this little amp really are excellent clean tones, so as long as you're fine with using dry cleans or pedals, you're set to go!

This amp, though it's basically a little monitor still manages to somehow sound really excellent. I'm not sure how Traynor did it but they were able to pack a ridiculously gutsy and powerful sounding clean tone that works so well for funk or blues type sounds into such a little package. It almost sounds like there is a built in compressor or limiter that ever so slightly distorts the signal giving some great natural sounding breakup to the sound. Considering that this is a tiny little solid state amp, that comes as a surprise. Using single coils yields some great classic funk and country tones, and switching over to humbuckers thickens up to the tone for some clean classic rock type textures with a hint of natural breakup... oh yeah!