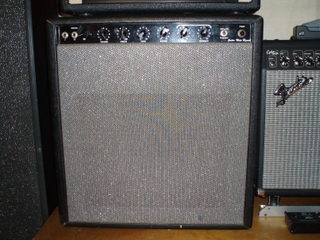 (contenu en anglais)
Afficher la traduction automatique
Afficher l'avis original
The Traynor YGM-3 Guitar Mate Reverb is a guitar combo amplifier that has two 1/4 inch connections in the front, some of which I believe have three inputs as well.  The amp is a tube based amp and is one that also has some on board effects including reverb and tremolo.

The configuration of the Traynor YGM-3 Guitar Mate Reverb isn't hard to follow at all and will only take a glance or two to be able to understand exactly what everything does.  The amp has knobs for volume, bass, treble, reverb, and speed and intensity for the tremolo effect.  Getting a good sound is pretty easy especially if you are into tremolo as you simply turn up the speed and intensity and bit and you have yourself a pretty good sounding tremolo effect.  The reverb is pretty good as well and I'm definitely a fan of the way this amp sound when simply used clean.  Since this is a pretty old amp I've never had access to a manual but don't need one anyway as the amp is quite easy to use without one.

The sound of the Traynor YGM-3 Guitar Mate Reverb isn't anything all that incredible but does sound really good in my opinion.  The clean sound is pretty crisp and when turned up loud will give you some nice tube overdrive as is the case with most tube amplifiers.  The effects are also really good on this amp as I love the tremolo and the reverb isn't half bad either.  I use the amp usually with a Fender Strat or a Gibson SG and while they are varying tones of course, they both sound pretty cool with this amp.  I've never used too many effects with this amp beyond a Boss DS-1 distortion as I like the reverb and tremolo enough to just need those while using the amp.

I've had the Traynor YGM-3 Guitar Mate Reverb for years as it has been in my family for a while now, way before I even used it.  I've always liked the sound of this amp, but it doesn't compare to some other tube amps from a similar time like the Fender Twin Reverb, but does sound solid in its own right.  You can get these amps used for a pretty decent price if you can find them and I would definitely recommend trying one out if you ever get the chance.
Le Traynor YGM-3 Guitar Mate Reverb est un ampli guitare combo avec deux entrées jack 1/4" en façade, certains d'entre eux ont, me semble-il, trois entrées. Il s'agit d'un ampli à lampes comportant une réverbe et un tremolo.