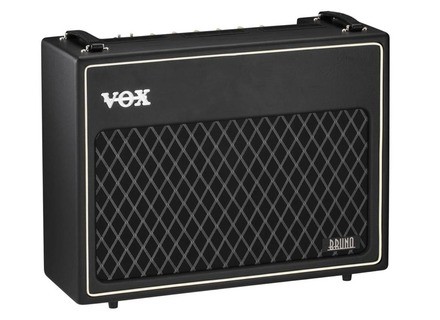 I bought this on the strength of a description I found on the net.

Back in the 1970s I used AC30s extensively playing in local bands. It was ideal for my purposes playing rock, psyche rock and electric blues. Since then I've acquired the taste for Fender amps. I currently run a '59 reissue Bassman 4x10, but I find it too powerful for smaller gigs. So I bought the TB35C2 and I'm delighted with it. I did a modification however.

It arrived with a pair of Celestion 12" speakers, and frankly I found it a bit shouty and heavy to transport. So I changed the Celestions for a pair of Jensen ceramic-drive 12"s, and while this made the enclosure much lighter, it also gave a more creamy, Fender-ish tone which pleased me greatly.

So now I have a 2x12 35w Vox, which is capable of covering the same kind of tonal ground as the Bassman, but on a usefully smaller scale. It has a lot of possibilities with the controls, but generally I'm looking for a fat, low-mid rich, compressed dynamic with some sharp top available for cut-through and rhythmic playing, and it does all that very willingly. It has a nice, warm and complex reverb (which the Bassman doesn't), and it responds very readily to changes in guitar volume, and also to my TS9 Tubescreamer. (I play mostly strat and tele.) A major advantage over the Bassman is the presence of a master volume, which doesn't wash-out the tone until it's turned down a lot. So - unlike the Bassman - it doesn't scare drummers, unless you want it to.

Thus, unlike the guy in the last review - who can't figure out what it's for - I can tell you it's for me! I love it. Warm and edgy Fender sound (4x6v6) with a high-mid AC30 UK bias whenever you want it. A success. Well-done Vox, well-done Tony Bruno !
Avez-vous trouvé cet avis utile ?ouinon