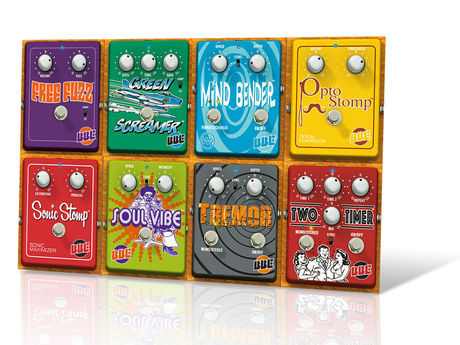 (contenu en anglais)
Afficher la traduction automatique
Afficher l'avis original
The BBE Stomp Ware Bundle is a bundle of eight different plug-ins that are all modeled after hardware pedals made by BBE. This bundle is actually put out by Nomad Factory and BBE in cahoots. The eight plug-ins included in the bundle are Sonic Stomp, Soul Vibe, Free Fuzz, Green Screamer, Tremor, Mind Bender, Opto Stomp, and the Two Timer. You'll install the bundle as a whole, and none of the plug-ins are available on an individual basis. It's definitely nice to get this many different effects in one place, but they're pretty limited in what each of them can do, as most only have two knobs in order to follow the make up of their hardware pedal counterparts. While the plug-ins are designed for guitar, they're definitely useful across the board in terms of possible applications. All of the plug-ins in the bundle are pretty easy to use, so unless you're an absolute beginner, I wouldn't think that a manual would be something you would need.

I'm running the BBE Stomp Ware Bundle on my recording system at home. This set up runs with Pro Tools LE 8, which I run with a Digi 002R audio interface. The computer I'm running everything on is a Mac Book Pro that has a 2.2 Ghz Intel Core 2 Duo processor, and 4 GB of RAM. These plug-ins are all really low processing guzzling plug-ins, so they should be able to run on most systems.