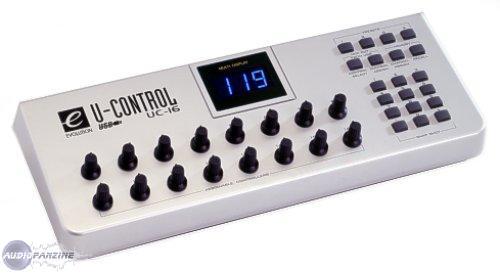 (contenu en anglais)
Afficher la traduction automatique
Afficher l'avis original
I rated the Features at an 8 becuase for the price and the software presets that came with the device. It was cool to see that a little thought was put into adding presets for some of the more popular VSTi's out there. The CD came with a few demos of the excellent NI soft synths, and evolution in house CRAP STUDIO V.2 DO YOURSELF A FAVOR AND DONT INSTALL SOUND STUDIO II. If you even get the application to work, you'll 2nd guess your purchase because it looks like a Fisher Price toddler program. I had to switch it to NT Compatible mode since Im running windows 2000 and the piece of trash became overloaded with my VSTi's and crashed several times. So aside from that, I was very pleased to actually be able to use some presets. The driver install was not as difficult as alot of people on the net claim it to be. It was actually very simple, and I was using it in Reason 5 minutes after it was out of the box.

VERY EASY to use. Plug it in. Activate the midi port. twist some knobs.

Evolutions units are the cheapest I have ever felt. This device is no exception. The knobs are no bigger than an eraser on a pencil, and the indicator dial is solid black, and not very raised. this makes it damn near impossible to take a visual snapshot of your controller config. The box weighs 1 pound, and the back lacks a midi out, although they show you how cheap they were to not include it. I DO LOVE THE LCD SIZE THOUGH. I wish it showed more, but for 100.00 bucks, it's way worth it.

I love the little box. It's cheaper than a phatboy, and you can hook up 5 to one machine. It's a neat device if you need the knobs. However if you have a ton of knobbed devices around the house, just daisy chain those ho's and save the 100 bucks and go to the pawn shop and try to scam something you can make noises with.