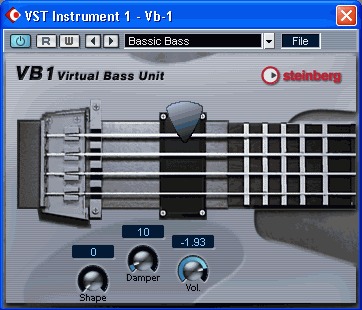 (contenu en anglais)
Afficher la traduction automatique
Afficher l'avis original
The Steinberg VB-1 Virtual Bassist plug-in came installed with Cubase SX when I was running that software, so the installation process was as easy as installing the sequencer software. Since both were made by the same company, I had no compatibly problems and since installing the software have never had any issues with it at all. The interface of the plug-in is pretty easy to follow as it only has a few different parameters - one for shape, one for damper, and one for overall volume. It also has a wide variety of presets that really come in handy when you are trying to pick the perfect sound. I've never seen the manual for this plug-in, so I can't speak to how helpful it is or not when trying to learn this software.

While I have since upgraded my system to Pro Tools LE and no longer run this plug-in or Cubase SX, when I did I ran it on a Hewlett Packard lap top that had a 3.0 Ghz processor and 2 GB of RAM. While I didn't use this plug-in everyday, when I did I never had any problems at all running it. I would really only run one at a time and I believe that most will be doing the same, but I can't say how well it would run if you wanted to run a lot of them at once, but I'm not sure why anyone would want to do that anyway.