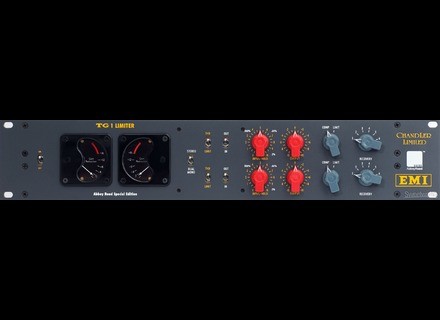 Acheter ce produit neufVoir tous les prix >
Afficher la traduction automatique
Afficher l'avis original
The Chandler Limited TG 1 Abbey Road Special Edition is a stereo limiter, but not just any stereo limiter. It's a recreation of the limiters found in the old EMI consoles that were used in Abbey Road Studios and used on many classic recordings, including of course those made by a band called The Beatles. This is an all analog unit, although I'm not sure the connections it has since the one that I've used was already racked up and hooked into a patch bay. It is rackable and will take up two spaces in a traditional casing.

It's pretty easy to understand the working parts of the Chandler Limited TG 1 Abbey Road Special Edition. Each of the two channels gives you parameters for input/threshold, output, a compressor/limiter selector, and recovery time. There are also switches for choosing between THD/limit and input/output VU monitoring. Lastly, there's a stereo/dual mono switch to use as well. I don't think a manual is necessary, but if you just purchased one, it's probably a handy thing to have around.

The Chandler Limited TG 1 Abbey Road Special Edition is one of the best stereo limiters that I've ever had the pleasure of using. I've used it for a variety of options including on overheads for drums as well as used each channel in mono mode for other compressing and limiting for applications like on vocals and electric guitar. I haven't used it on a 2 mix, but I'm not sure it's the best for this application anyway. It doesn't get much warmer sounding than this in a compressor/limiter.