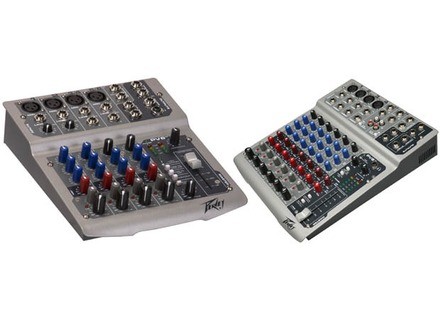 Acheter ce produit neufVoir tous les prix >
Afficher la traduction automatique
Afficher l'avis original
The Peavey 8 (PV8) is an 8 channel mixer that has no effects and no compression. It would have been much better if it would have came with compression because it is a little more expensive than other similar units but it doesn’t have many more features. There are 8 inputs and 1 output on the PV8 and you can also purchase this with fewer channels or more channels from the PV line.

The EQ is very good on this small mixer; you can really get the sound the way you want it to get by turning some EQ knobs. There is also an LED for your signal and clip monitoring. All of the knobs are color coded making it easy to remember what they all do. The knobs are very well made and not a single one of them gave me any issues after using this mixer for a while (around 2 years).

There is nothing special about this mixer, but it just works well. The EQ is better than most others in the same price range and it is made well. If you want to save some money than look at some of the 8 channel Behringer mixers; because they are very similar and cost about half of what the PV8 cost.

The value for the price is not good, it is a little overprice for average specs and features that it gives you. The only thing about it that makes it worth the money is the EQ and the actual quality of the mixer. It does seem to be made out of more solid and heavy materials than some of its competitors 8 channel mixers. The sound really is nothing to brag about and the preamps are not that good. I do still have this but do not use it at all anymore because the Behringer Xenyx 802 is better to me and it is much cheaper.
Le Peavey 8 (PV8) est un mixeur 8 canaux qui n'a pas d'effets ni compression. Il aurait été beaucoup mieux si elle aurait livré avec la compression, car il est un peu plus cher que d'autres unités similaires, mais il n'a pas beaucoup plus de fonctionnalités. Il ya 8 entrées et 1 sortie sur le PV8 et vous pouvez également acheter ce avec moins de canaux ou plus de canaux de la ligne de PV.