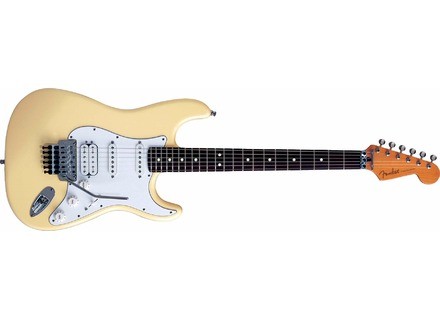 This guitar had a few issues when I went to test it out. First of all, it was a used guitar, so keep that in mind. The guitar had some fret wear, and the frets needed to be leveled and recrowned. Given how much wear there was, this could mean that it might need a refret depending on who is playing it. The edges weren't bad, however. The neck joint had a bit of a gap in it, but it was only slight. It shouldn't affect anything too much. The bridge on this had some wear, and I would have replaced a few parts that were pitting, personally.

This guitar had a JB and some Classic Stacks installed in it, so I'll be going by those. The JB in the bridge is one of my favorite pickups for pure versatility in Strats. It can be a bit bright at times, but it really depends on how the actual guitar sounds. The bass is a touch vintage, but it allows it to do anything from blues to death metal with the right setup. The Classic Stacks are pretty cool pickups in that they're powerful enough to do leads but clean enough to have some very nice cleans when needed. They don't kill the amp with output, but they're also not so low that it's impossible to solo on them.