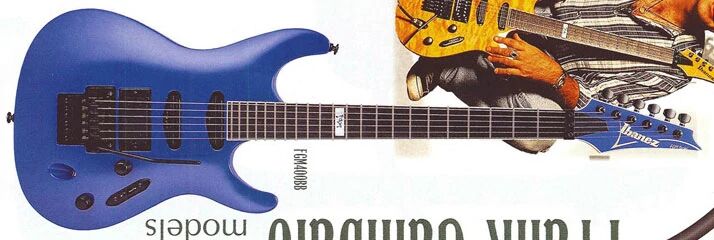 (contenu en anglais)
Afficher la traduction automatique
Afficher l'avis original
Frank Gambale has had a few different signature models with Ibanez before moving to Carvin. This is his last model before he made the move. The guitar features a mahogany body with a quilted maple top, maple neck with a bound rosewood fretboard, unique 12th fret inlay, HSS configuration, Lo Pro Edge, one volume with a coil tap, one tone and a five way switch. The most unique features are actually the fact that the pickups are sunken lower than normal. The bridge and neck are also further down to make everything extremely streamlined.

The guitar looks awesome. The quilted maple tops on these really pop, and the one I played was no exception. The fretwork on these are pretty much all top notch. There was some minor fret wear on this since it was used, but it wasn't a big deal. Getting up to the higher frets is very easy thanks to the AANJ. The trem is also probably the best floyd out there ever made. Getting to the specifics, the most unique features of this guitar are the sunken cavities. These really allow you to get super low action without anything really getting in the way like they normally do. It's such a unique feeling to have everything so low and close to your hand. Those of you who are used to playing Gibson style guitars will surely hate this as it's such a different feel.

I have to admit, I'm not a huge fan of the stock pickups. However, this one didn't have stock pickups. Someone had replaced the bridge with an Evo and replaced the neck pickups with Cruisers. The Evo in the bridge really screamed. You have some awesome cut going on, but the mahogany helped mellow it out just enough. It split extremely well, too. I find these higher output pickups split nicely. The Cruisers in the neck and middle were super fat sounding, and they really worked well with this guitar. You could get some insane legato going on, and the clean tones were very fat.