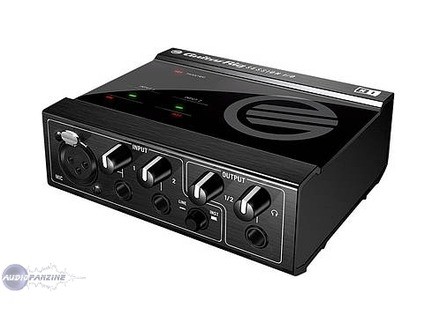 Afficher la traduction automatique
Afficher l'avis original
The Native Instruments Session I/O is about as basic as an interface gets. It is suitable for use in a single performer situation. I purchased this after a disappointing experience with the drivers from another interface. It was intended to originally be used with Sonar 7 as my gateway to record guitar and bass. The main reason I considered purchasing this unit was the fact that it was packaged with Guitar Rig 3 at the time and I knew there were going to be zero compatibility issues. Getting the software was actually an after thought to the purchase. It offers two inputs on the front panel each with their own level control. Channel 1 has an XLR and a quarter inch jack while channel 2 offers only a quarter inch jack. There is one switch for choosing line or instrument level and the XLR is equipped with phantom power. There are two more dials on the front one that controls the monitor level and one to control headphone output, which is a quarter inch jack also on the front. The rear of the unit has two TRS quarter inch monitor outputs and one button for activating the phantom power as well as the USB connector. There are a few led indicators on top to monitor input also. The unit is very Spartan in design but it does sport decent conversion and high sampling rates. The pre-amps on the unit are not stellar but better than average giving just enough gain as you hit the ceiling. The best thing about this unit has always been its stability. I do not have any issues with crashes coming from the interface.

The best thing about this unit has always been its stability. I do not have any issues with crashes coming from the interface. I generally have a minimal latency of 3ms-5ms while tracking at 24 bit/48kHz. The unit has sampling rates up to 192 kHz but I have no need to sample any higher than what I use. I have used it for Sonar 7, 8, 8.5, and X1 with no issues. It is unfortunately only capable of recording 2 tracks at a time but if you are alone all the time it does suffice.

There were no compatibility issues on either of my computers. The older AMD fx , and my current AMD phenom. The manual was sufficiently written but honestly, the unit is to simple to connect to even need one. Everything is accessed easily whether it is in the DAW or on the desktop during common everyday functions.