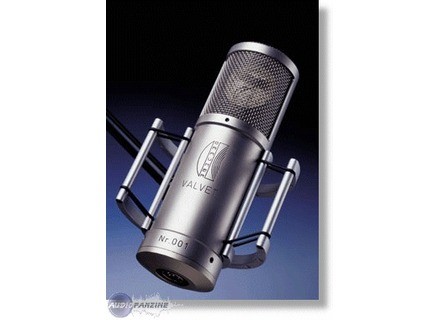 Acheter ce produit neufVoir tous les prix >
Afficher la traduction automatique
Afficher l'avis original
The Brauner Valvet is a high end valve tube microphones for use in the recording studio. It has a large diaphragm and two different pick up patterns to choose from - omni and cardioid. It will pick up the frequencies between 20 Hz and 22 kHz, which is just about as wide of a range as you can ask for that isn't a 'high-def' microphone. I'm not sure if the mic comes with the shock mount or power supply, or if you have to buy them separately.

I've only been able to try out the Brauner Valvet a single time, and that was for recording male lead vocals on a pop rock type of song. I was running the mic through a Neve console, without any compression or other effects. Judging from the one time that I used it, the sound of Valvet is one of the cleanest and most realistic that I've heard to date. The sound really comes in loud and clear, sounding just as if the person was standing next to you. If this Brauner model sounds this good, I can't even imagine that their really high end stuff sound like! Since I haven't had the chance yet to use the mic on anything other than vocals, I would bet that it would sound good for most practical applications out there. I didn't find that the mic colored the sound at all, which is a good sign that it will work well in many different situations. Even though this isn't the most expensive microphone that Brauner has to offer, it will still cost a good amount of money and is really aimed at professional studio owners. However, if you are a professional studio owner or a home studio owner with a good amount of money to spend on a top end mic, definitely look into this mic as I think you'll be happy that you did.
Le Valvet Brauner est un microphone haut de gamme de soupape du tube pour une utilisation en studio d'enregistrement. Il a un grand diaphragme et deux pick différents modèles jusqu'à au choix - omni et cardioïde. Il va ramasser les fréquences entre 20 Hz et 22 kHz, ce qui est à peu près aussi large d'une gamme que vous pouvez demander que le micro n'est pas une «haute def '. Je ne sais pas si le micro est livré avec le support de choc ou d'alimentation, ou si vous devez les acheter séparément.