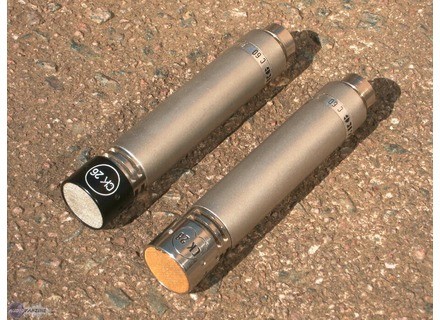 Afficher la traduction automatique
Afficher l'avis original
The AKG C 60 is a small diaphragm condenser microphone that's designed for use in the studio. I don't know the exact years of production on the C 60, but it's no longer being made and can definitely be considered 'vintage.' The mic has a cardioid pick up pattern and has an easily swappable capsule, although I think the capsule on the one that I used was the standard one. The mic picks up frequencies between 20 Hz and 15 kHz, and I guess you'd like to see it pick up to 20 kHz, but it doesn't seem to affect it's ability to pick up high register instruments.

I've only had the chance to use the AKG C 60 for one application, but next time I go to the studio where I used it, it's definitely going to get a second look for some other things. I used it to record hi hats within the context of a full drum kit and I was really impressed with the clear sound it achieved without having to do much for it. It was a simple case of throwing the mic in a good spot and running it through an amazing console and it produced a very true sound. The studio I used the AKG C 60 at is one of the biggest in the world and I think they have a few of these on hand. I almost went with the AKG C 61, which is very similar and I had had prior use with it, but decided to take a little risk and try this mic since I had heard great thing about it. I'm glad I did as I'll definitely be using it again next time I'm working over there. I don't know anything about price or availability when it comes to the AKG C 60, but I can't imagine it being cheap or very easily accessible. If you're looking for a vintage small diaphragm however, it might be worth doing a little leg work for it.
Le C AKG 60 est un microphone à condensateur à petit diaphragme qui est conçu pour une utilisation en studio. Je ne sais pas l'année exacte de production sur le C 60, mais c'est ne plus être faite et peut certainement être considéré comme «vintage». Le micro a une cardioïde ramasser modèle et possède une capsule facilement interchangeables, bien que je pense de la capsule sur celui que j'ai utilisé était le standard. Le micro capte les fréquences comprises entre 20 Hz et 15 kHz, et je suppose que vous aimeriez voir le ramasser à 20 kHz, mais il ne semble pas affecter sa capacité de ramasser les instruments registre aigu.