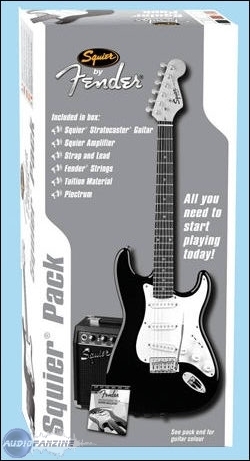 (contenu en anglais)
Afficher la traduction automatique
Afficher l'avis original
After going to my first concert, I decided that I wanted to play guitar. My parents went out and bought me this package for Christmas. I’m a bit torn when it comes to reviewing this as there are two sides to this story. I guess I should start with the good stuff first.

The Squier Affinity package is geared towards beginner guitarists who want to start playing the electric guitar. It comes with a guitar, a gig bag, a cable and even an amplifier. Everything is fairly bare bones, especially the amplifier. For the guitarist just starting out, this is a pretty good, complete package. Add a tuner, start practicing for hours a day and you’re guaranteed to excel.

The main problem is that this guitar is really built poorly. When I got mine, they were being made in China. I’m not sure if they’re still MIC, but mine was a total piece of shit. The amplifier sounds like total garbage, and there’s absolutely no real tonal variety. The pickups are garbage, and the wood is some mystery “solid wood.” I think it’s agathis. I used this guitar for a few years before I decided I need to upgrade to something better. The bridge’s saddle height allen bolts stick out and cut your hand, the fret edges were awful, the neck joint had a huge gap and was just a poor guitar. Despite that, I practiced for hours and hours a day on this thing, not knowing any better.

For a beginner guitarist, I really think you can do much better, but you also have to look at the age of the player. When I got this, I was about 13 years old, and most people who buy these don’t want to spend a ton on an instrument their child might or might not use. It’s hard for me to recommend it, but it’s also hard for me to totally dismiss it.
Après être allé à mon premier concert, j'ai décidé que je voulais jouer de la guitare. Mes parents sortis et m'ont acheté ce paquet pour Noël. Ima peu déchirée quand il s'agit de revoir cela comme il ya deux côtés à cette histoire. Je suppose que je devrais commencer par les bonnes choses d'abord.