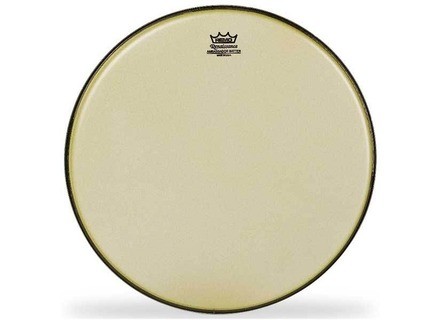 Acheter ce produit neufVoir tous les prix >
Afficher la traduction automatique
Afficher l'avis original
These are very nice drum heads that the Remo corporation developed to sound more like the calf skin heads of long ago (well it wasn't really that far ago, but it definitely feels like it!).

At the time they were developed these heads were definitely the closest thing, but there have been more recent developments in head making (some by the Remo corporation themselves) that have not necessarily made the Renaissance heads obsolete, but have given them a place all their own.

First off, these heads sound UNBELEIVABLEon tympani and I personally don't think there is any better head out there. They really do give the feel and sound of calf skin on tympani better than any head I've ever tried.

As a tom head however, the Renaissance heads leave a bit to be desired. They do give a warm and focused sound, and if you want a good attack to balance the two, then this is the head for you. But for my tastes they are a little bright and while they give a warmer, darker sound than regular coated heads (and definitely more so than clear heads) there are better products (in my opinion) currently on the market for achieving that warm dark sound characteristic of calf skin.

The most notable is the Remo fiberskyn heads, and secondly are the Evans J1 etched heads.

One thing to try is using these as resonant heads on your toms- I've done so and like (but don't necessarily love) the results.

These heads are great for orchestral use and for playing in acoustic jazz situations, but I don't see them as being very applicable in genres outside of the two aforementioned- absolutely not rock and roll and absolutely not metal, but could possibly fit into an R&B band and probably wouldn't fit into a funk situation (but feel free to experiment and surprise me!).
Ce sont des têtes de tambour très agréable que la société Remo développé pour ressembler beaucoup plus à la tête de la peau de veau il ya longtemps (bien qu'elle n'était pas vraiment très loin il ya, mais il se sent vraiment comme ça!).