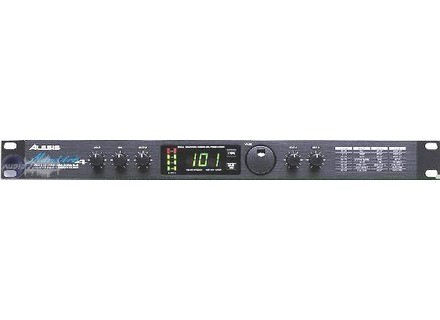 Voir les autres avis sur ce produit :
Afficher la traduction automatique
Afficher l'avis original
Obviously this is primarily a reverb rack unit, you do get some other effects to color things up. There is Delay, chorus, pitch mod, flange, leslie simulation (ok, nothing really nails the real sound except the real thing) and some special effects and harmonizer type effects. This is a digital effect, but clean and warm none the less. You cannot edit it through a computer, but it does have midi in/out. Besides the midi, you get Stereo 1/4&quot; in and Stereo out. You can run mono also, but I recommend stereo, you get more out of the effects that way. You also get a 1/4&quot; stereo footswitch input, which is Very! awesome. It gives you a couple of options. You can use it as a bypass switch (on/off effect), a control switch when you use the leslie simulation (speed up or slow down) and you can use it as a tap tempo by tapping it, or by holding it down and playing something, of which the unit figures the tempo out accordingly. VERY COOL! Yes, it is a rack mounted unit.

This is a pretty simple unit to use. Most basic reverb units are. You get 100 presets and 100 user banks to save into. They give you a sheet with a total breakdown of the effects and that is very helpful, don't lose that unless you have great memory. Its nice to have nearby when using this unit live. It has two knobs on the left side that are for quick editing. They correspond to the each effect preset and have different applications for each. The manual is easy to read and has answered all of my questions so far. Again, the preset list is key.

You can find this unit for under $160 and for that price, this reverb is great! Some of the extra effects (pitch mod, harmonizers) I don't really see using that much, but they are fun sometimes and I like having them there...they might grow on me. I use this mainly in recording and I use if for everything that needs a little reverb, especially vocals. But it works great for drums, guitar, keys, you name it. They have a lot of presets already edited to work with certain instruments (pretty convenient). If I had to pick, it sounds the best on the vocals, but sometimes I use it on the whole master mix and get some pretty cool post production effects. I really don't dislike this thing on anything I have used so far. Its a reverb and it sounds good, so you really can't go wrong.