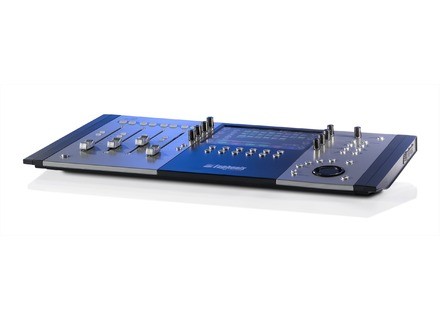 Voir les autres avis sur ce produit :
Afficher la traduction automatique
Afficher l'avis original
The Artist Mix is made by Euphonix and it is a control interface that has motorized faders and all of the buttons and knobs can be programmed to work with your DAW. This control interface is so easy to use, and you can use it on Windows computers and Mac with a very easy set up process for both systems. This interface is on the higher end of the price range but because the sliders are motorized and the interface of the unit is very user friendly makes it worth the money.
This control surface is very portable, it cannot be racked but it does not take up much of your workspace. I have been using it since about 2010 and it has never gave me any problems. All of the motorized faders work great every single time and they are well made. I have never had a single issue with any button or knob on this control interface since the day it came out of the box. There are 63 soft keys and a total of 8 knobs. There is also an input footswitch which I do not use because I just don’t have a use for it. This mixer is surprisingly portable weighing less than 5 pounds, I also have a gig bag that did not come with it but I use it to transport the Artist Mix from place to place just to keep it scratch free.
There are no audio inputs or outputs on this mixer, and it does not connect to your computer from a USB or MIDI cable. It takes a Ethernet connection to sync it up to your computer Mac or PC. The interface and layout of this mixer is what really draws me to it. It is laid out perfectly for my set up and using it with Logic and Cubase has made my workflow so much easier. Only thing that I wish is that it had the start, stop and record function on the bottom center portion of the mixer.