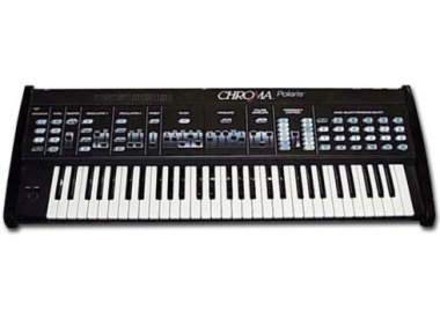 Rapport qualité/prix : Excellent
Voir les autres avis sur ce produit :
Afficher la traduction automatique
Afficher l'avis original
The Fender Chroma Polaris is a synth that was made in the early 80’s and released in 83. The original price of it was around 800 dollars which was pretty expensive in but not too much compared to other synths that were on the market in the 80’s. The Polaris was the only fully programmable synth that sold for well under 1000. It has 49 keys that are non velocity sensitive and two buttons for data entry. Also a joystick controller that you can use to modulate with.

Another neat thing about the Polaris is that it was the first synth to introduce midi to the music world, which is why my group decided to purchase this because it is a vintage synth that has midi connections for the current trend of music equipment. Polaris was way ahead of its time when creating this one and that’s why Polaris has been around and is still one of the top companies.

The sounds are classic sounds of the 80’s and some can still be used in today’s music and still bring new flavor, t can be switched into double mode and that stacks two dco’s for fuller sound, much like you can on software today when you stack instruments. You could do it right on board with the Polaris , not many other boards allowed that to happen.

Overall the Polaris is a great top of the line vintage synth. If you love vintage synths like I do you must find one of these they are really cheap now and hold up well. It has a built in sequencer just in case you don’t want to use the midi with your computer you can create full compositions right on board. Another neat thing is that you can run it off of batteries, so its really portable as well. This board is no longer produced and they don’t carry parts for it anymore. They stopped making this in the late 80’s, but its still relevant today. Its amazing!