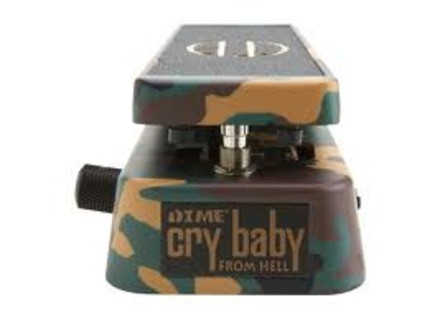 Afficher la traduction automatique
Afficher l'avis original
Not a lot of people know this, but there were actually two different types of wah pedals that Dunlop offered for Dimebag. One was the DB01 that everybody seems to know, but the other was the DB02. This pedal has been discontinued as it didn't sell as well, and I never understood the reasoning for it. This has all of the "features" stripped out of it has just has one fixed setting that Dimebag seemed to prefer. Basically, you always have Dimebag's settings if you buy this pedal. It's not nearly as versatile as the other one.

The pedal housing is super strong, and they withstand all kinds of abuse. It's pretty interesting to see the super old wah pedals and notice that the design really hasn't changed much since it was first made. That just goes to show you how awesome the pedal was from back in the day. I really like the skateboard grip tape on this pedal, and I recommend that mod to anybody who happens to have a wah pedal. It really helps, especially when on tour. The manual isn't needed as it's just a basic wah pedal where you move your foot to make some noise.

The sound is decent, but it's a bit thin sounding compared to some of the other wahs out there. It's also a bit gainy, so you'll be getting a kick in the nuts when you turn this thing on. I really don't like the fact that the settings are "fixed." I'm assuming this is the reason why the pedal was discontinued. People wanted the extra versatility of the DB01, not the fixed settings of the DB02. It's a decent pedal, though.