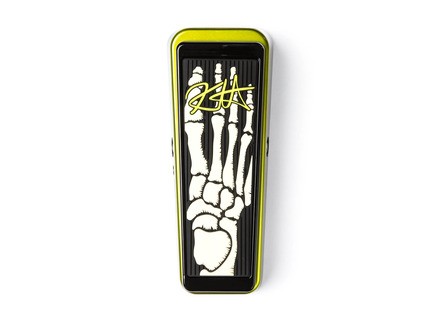 Acheter ce produit neufVoir tous les prix >
Voir les autres avis sur ce produit :
Afficher la traduction automatique
Afficher l'avis original
Kirk Hammett KH95 Wah pedal, designed after his rack wah settings. Huge throaty tone like from MetallicA's Black Album. I'm a good sized fan of MetallicA but I bought this for the tone, not for who's it is. I could care less who's name is on the pedal as long as it sounds good. I did research and comparisons for a few years trying to find the right pedal. Went through like 8 different wahs and ultimately settled on this one, and this won't be leaving. The paint job is pretty cool, metallic green to black fade. The skeleton foot on the treadle isn't the most attractive, but who cares? It's a damn pedal.

I looked at a few more boutique wahs like the Fulltone Clyde and the RMC picture wah and while they were great the price wasn't. I planned to get the Fulltone but for $245 I chose the KH95 and so happy I did. I've played a Fulltone since then and while it was great it was a bit overkill and the tone still wasn't quite where I wanted. So the Hammett was pretty much like a pedal designed for me, and a bonus at a killer price too.

Very simple pedal, no knobs or switches to mess with. Plug it in and go. Not a lot of tweakability if you like it, so that's a plus if you like it simple and the way it is, but a con if you want the options.

I bought this looking for that very thick, throaty sounding wah that most pedals I've tried couldn't get. I loved Hendrix's wah, and my favorite wah was Kirk Hammett's from MetallicA's Black Album. Very thick, throaty, and cuts through amazingly. Well supposedly he owns one of Hendrix's hundreds of wah pedals and used it on that album. Live he used a EBM rack wah to mimic his vintage studio wah. Later on he switched to the Dunlop rack wah again trying to mimic his studio wah. This pedal was designed by taking his rack wah settings and putting them into a pedal. So basically this pedal is a pedal form version of his rack wah which was tweaked to mimic a vintage VOX V846. I haven't played a vintage VOX but I have owned a Dunlop Crybaby from Hell, Original crybaby, Hendrix crybaby, VOX V847, Morley Power Wah Distortion, x2 vintage Morley Power Wah Fuzz's, and an Ibanez Weeping Demon. All were pretty different but my favorites were the KH and the CFH.

Now of course this pedal won't nail the Hendrix or Hammett tone, there's so much more that goes into their tone than just the right wah pedal. But this does give you a close sound of that piece alone. My favorite example is the solo to "My Friend of Misery". Huge wah sound, everything I'd ever want from a wah.