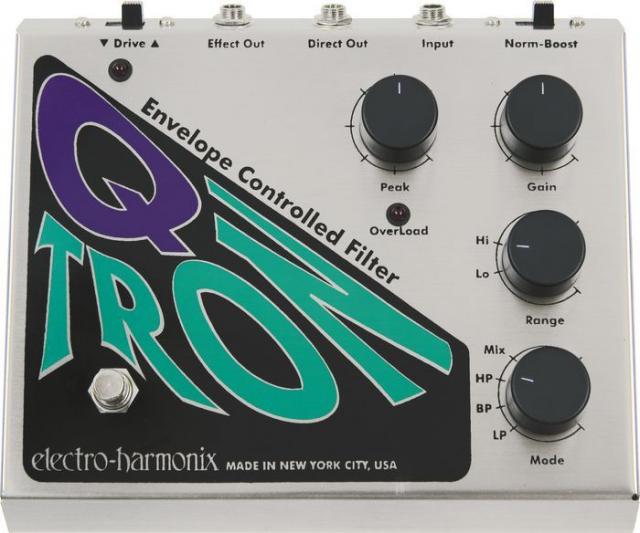 (contenu en anglais)
Afficher la traduction automatique
Afficher l'avis original
The general characteristics of the Electro-Harmonix Q-Tron aren’t out of the ordinary, as the pedal is enclosed in a pretty standard shape and design as a number of other pedals made by them.<span> </span>It has ¼ inch connections for input, direct output, and effect output, and is powered by the power supply that comes with.<span> </span>I’m not sure if you can power it with anything other than the Electro-Harmonix power supply, but I do know that most Electro-Harmonix pedals do not have this luxury.<span> </span>It isn’t a rackable piece of gear as it is a foot pedal.

<p class="MsoNormal">Using the pedal isn’t a hard task in the least, as everything is laid out clearly and without dispute.<span> </span>You’ve got parameters in the form of knobs for gain, range, mode, and peak.<span> </span>The mode knob has four different settings.<span> </span>There are also switches for drive and normal boost.<span> </span>A small amount of fiddling with the Q-Tron allowed me to get a pretty good grasp of how to use the pedal and what the pedal is capable of doing.<span> </span>Unless you’re a beginner or are having technical issues, a manual definitely isn’t needed.

<p class="MsoNormal">When talking about the sound quality of the Q-Tron, let me say that I’m usually more of a traditional wah-wah type guy rather than filtering when it comes to guitar pedals, but I absolutely love the Q-Tron.<span> </span>You can really get all sorts of interesting tones from the pedal that will work on everything from funk to rock n roll.<span> </span>I’ve used the pedal for recording, mostly with a Fender Strat and a ’65 Deluxe Reverb, but have also used the pedal with a Fender Jazzmaster and a ’76 Fender Twin Reverb, as well as with mixing and matching them.<span> </span>The sounds that I’m able to achieve with any combination of these is outstanding.<span> </span>So often I find that the Q-Tron could be helpful to my tone, and while I don’t always stick with it for a recording, more often than not I end up loving what I do with it.