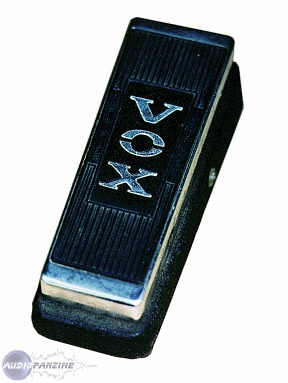 (contenu en anglais)
Afficher la traduction automatique
Afficher l'avis original
Classic wah tones. Pure and simple.. at least the closest available using Fasel inductors.. maybe not the EXACT same tone as the original Clyde, but certainly the closest you can get without running the boutique route at about 100+ bucks more.
This is a pure analog device.. pivoting rocker pedal.. True Bypass, shiny chrome.. no modeling,chips or silicone...
No editing options.. Put it on the floor. Step on it. Click the button. Wiggle it back and forth. Yay! It's a wah wah.

Um.. no manual necessary... no editing options... see characteristics. My kid can figure this out. (of course.. he already thinks he knows everything... so.....

Very sweet. The closest to classic tones available without spending at least $100.00 more. Great midrange manipulation within the lower ranges... it gets a bit screechy in the upper registers. The treble range becomes a bit tinny... almost similar to the high speed pitch shift on a Whammy effect... this can be neat, or annoying. Depending on the application. The best feature of this effect is the fact that it is not a watered down Morley effect.. with virtually no sweep, and tasteless generic flavor ( I cannot speak for the Vai or Tremonti wahs.. just their basic offerings. Never played the signature wahs..) And it is stronger than a Crybaby...(although from my understanding, this is built in the same facility) The recent addition Crybaby Classic also uses a Fasel inductor.. so.. the tones may be similar.. and at only $99.00.. it IS a worthy consideration... unless you need to see chrome on the floor. Whatever does it for you..
I have owned mine for almost 2 years.. and the pots are beginning to get scratchy. Yuck. Used with Les Pauls, Strats,Teles... running thru a Voodoo Lab Preamp, Carvin T100 poweramp, Digitech GSP2101 (for effects) into 2 closed back cabs with Eminence Cannabis Rex speakers. (more on those later
This wah provides realistic, classic tones heard on your favorite albums. As with any instrument.. the more you practice with it... improve your technique and level of control, the greater the sonic reward. It's sweep can be construed as a limitation.. in the fact that it gets TOO trebly, but this can be relegated to a control issue... when you become accustomed to the sweep, it is great to have the &quot;gas in the tank&quot;. You may not need it.. or use it.. but it's there!

Using this for a bit over 2 years. Love the classic wah tones and True Bypass. For years, the only options where tone draining washed out Morley or Crybaby options..To be truthful, the boutique guys like Fulltone, RMC,Budda, etc did everyone a favor. They raised the bar for quality. The wah had become an almost passe' effect.. brought back to life by the likes of Slash and Joe Satriani..(thanks guys!)... hence, the demand for better quality bypass... and a more pronounced effect.
I don't like the fact that it is getting scratchy...I will investigate my options and try some contact cleaner. We'll see.. should do the trick!
I find the value to be acceptable in the $150.00 price range.. although, being that I am not exactly a &quot;gear snob&quot; I would probably opt for the Crybaby Classic.. which I believe is also True Bypass and equipped with the Fasel inductor as well...At about $50.00 less. Other considerations would be the new Morley George Lynch model wah.. or perhaps the Vai Bad Horsie stuff, although these may not cut it for classic tones.
Tons wah classique. Pure et simple .. au moins la plus proche disponible en utilisant des inducteurs Fasel .. peut-être pas le ton exactement comme l'original Clyde, mais certainement plus proche que vous pouvez obtenir sans courir le trajet boutique à environ 100 dollars de plus +.
Ceci est un dispositif purement analogiques .. pivoter la pédale à bascule .. True Bypass, chrome brillant .. pas de modélisation, de copeaux ou de silicone ...
Pas d'édition des options .. Mettez-le sur le sol. Étape sur elle. Cliquez sur le bouton. Il Wiggle en arrière. Yay! Il s'agit d'une wah-wah.