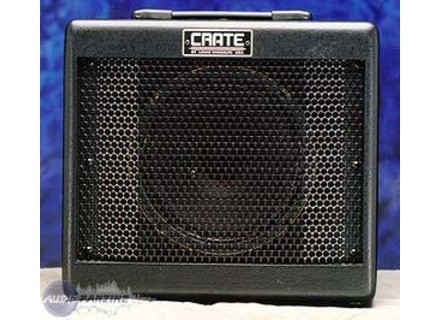 Rapport qualité/prix : Excellent
Voir les autres avis sur ce produit :
Afficher la traduction automatique
Afficher l'avis original
The Crate VC 508 is a very small tube guitar combination amplifier. The VC 508 has one EL84 tube, and a single 8" speaker. It has a 1/4" input for your instrument as well as a 1/4" output/insert jack. It will only deliver 5 watts of power, but it is definitely the loudest 5 watts that I have heard!

There isn't too much to work with in terms of parameters with the Crate VC 508, but there is enough. The amp simply has knobs for gain, tone, and master volume, and that's it. You obviously don't need to have too much experience with guitar amps in order to use this amp, but as always it helps. I don't believe that under any circumstance that you'd need a manual, although I haven't seen it so I can't say what it looks like.

The Crate VC 508 definitely packs a lot of punch for only a five watt amp! I wasn't expecting to be able to get it too loud, but was pleasantly surprised to find that it could not only get pretty loud but also that I only needed to have the volume up a little bit less than half way. I've used the amp with a Fender Telecaster for a recording - I wasn't playing, I was the assistant engineer. We were all very pleased with the end tone, as the amp sounds full even if it isn't the most versatile...

As far as five watt guitar amps go, the Crate VC 508 is one of the better ones that I've used. I would only recommend it for recording and practicing, but I guess I could also see it being used for very small venues performances. The price is pretty reasonable for the VC 508, but isn't as cheap as you'd expect for a 5 watt Crate amp for sure. I'd recommend looking around at small amps to see what will work best for you, but the VC 508 definitely wouldn't be a bad way to go.
Le Crate VC 508 est un ampli à lampes très petite guitare combinaison. Le VC 508 dispose d'une EL84 tube, et un seul HP 8 ". Il a un 1 / 4" d'entrée pour votre instrument ainsi que d'un 1 / 4 "Sortie / insert jack. Il ne livrera 5 watts de puissance, mais il est certainement le plus fort de 5 watts que j'ai entendu!