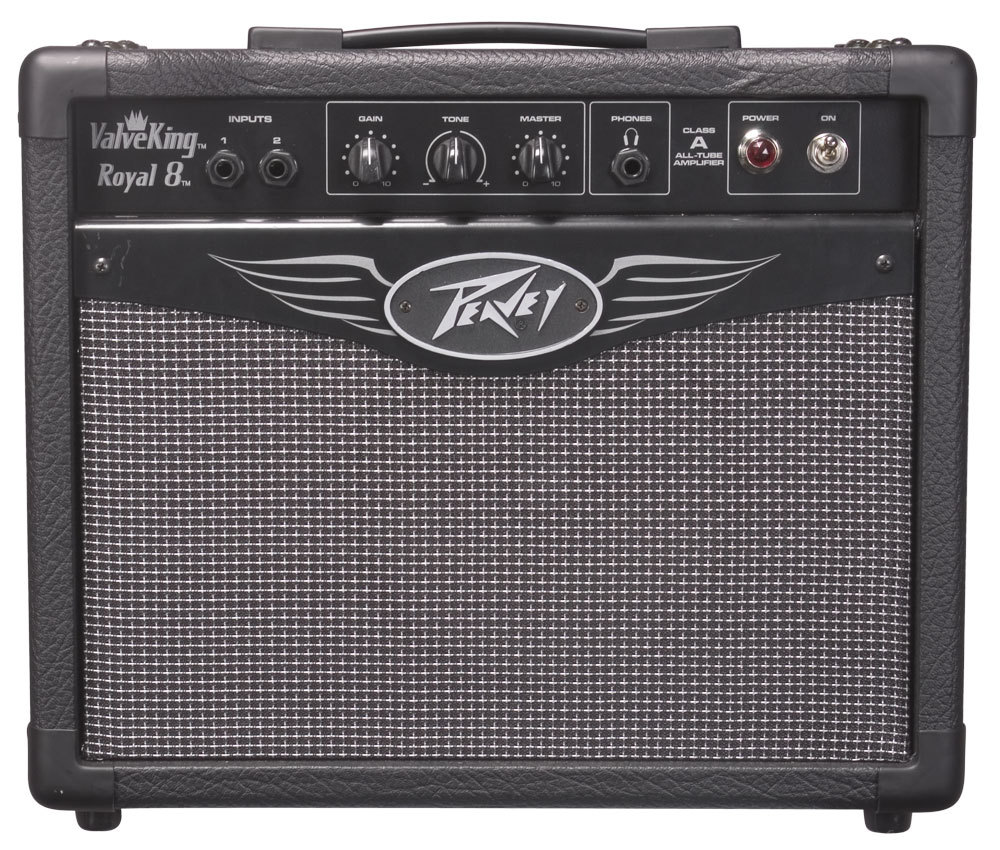 (contenu en anglais)
Afficher la traduction automatique
Afficher l'avis original
In today's world where space is considered a luxury, small guitar amplifiers are a godsend. It's not really surprising then that low-wattage tube amplifiers have become the trendy item for people who have crafted home studios for personal and professional use. One of these small, budget-friendly tube amps is the Peavey Valve King Royal 8.

As the name suggests, the Peavey Valve King Royal 8 is a 5-watt all-tube (or all-valve) amp with a single 8-inch speaker. It is a class-A amp with a very straightforward design, having a single 12AX7 tube for the preamp section and one EL84 tube for the power section. Looking at the front panel demonstrates its simplicity with its two inputs, an on/off toggle switch, a headphone jack, and three chicken-head knobs for control over gain, tone, and master volume. It's pretty obvious that this amp doesn't have all sorts of "bells" and "whistles" like a three-band EQ and effects that you would find in other amps of the same size.

The Peavey Valve King Royal 8's sound is simply that what you would expect from a tube amp: a nice, warm tone every electric guitar player would appreciate. With the right settings on one's own guitar plus the tone knob at 12 o'clock, the gain somewhere at around level 3 or 4 (this is not exact as there are no numbers around the periphery of the knobs), and the volume around 12 o'clock, we can get a pretty decent clean tone for a tube amp. Cranking up the gain to full provides a nice crunchy preamp distortion. Given the size of the amp, tone shaping possibilities, and a limited volume output, the Peavey Valve King Royal 8 is very useful in recording. For recording, one is required to use at least a single microphone because of the lack of a direct output jack, encouraging users to treat the amp more like an acoustic instrument during recording rather than just simple sound reinforcement.

The manual include is rather simple and easy to read. The matter of fact is that the Peavey Valve King Royal 8 could be used straight out of the box without the need to go through the manual. You can just plug it in to a power source, plug your guitar into one of its inputs, turn it on, fiddle with the knobs a little bit, and just start playing. A user can easily get a good sound from it on its own. For an amp its size, it is surprisingly loud and could even hold up on its own against a drummer without mic'ing it up. However, the amp cannot be overdriven to extreme levels (i.e. distorted sounds for metal) with its set of controls, and so getting it to sound really heavy for hard rock or metal requires the use of pedals.

I use most of my electric guitars on the Peavey Valve King Royal 8. Since I usually play jazz with it, I like tweaking it to get a clean yet warm sound. Occasionally, I would just set the gain knob to full for preamp distortion and control the amount of distortion by just lowering or cranking up the volume knob on my guitar. It is surprisingly responsive to volume control found on most guitars, and so it is relatively easy to get some classic sounding tones. In my experience, I get great sounding tones out of it with passive humbuckers like a Gibson PAF. To get heavier distorted sounds, I would use effects pedals with it.

The greatest thing about the Peavey Valve King Royal 8 is its simplicity. It's the kind of guitar amp that you just hook up and play right away. It's very easy to get great tones out of it because there's not a lot of things to adjust other than master volume, gain, and a single EQ knob. For a tube amp of its quality, I can say that it's money well spent. It's an all-tube amp you can get at a budget price. Compared to other amps of similar design, it has more control options than the Laney Cub 8 and the Epiphone Valve Jr. (three knobs for the Valve King Royal 8 against two for the Laney Cub 8 and one for the Epiphone Valve Jr.). I do think, however, that it would have been better if it was a two-channel amp (clean and overdrive) like a Blackstar HT-1. Had Peavey decided that it should have separate clean and overdrive channels plus footswitch control, it would have been the perfect studio and practice amp. Overall, I do think that the Peavey Valve King Royal 8 is an excellent all-tube amp that would meet the needs of most guitar players for studio and practice applications.

CONS:
- Single channel only (no separate clean and overdrive channels)