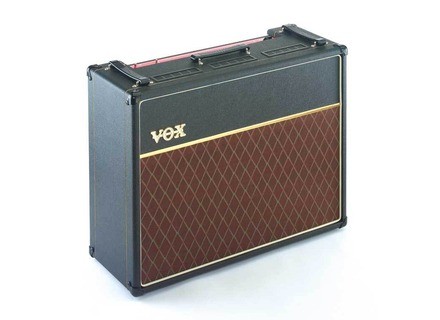 Voir les autres avis sur ce produit :
Afficher la traduction automatique
Afficher l'avis original
The Vox AC30 Brian May is a limited edition version of the classic AC30 electric guitar amplifier.  Like the original, this amp delivers 30 watts of power and has standard 1/4 inch connections for plugging your instrument in.  However, the amp only has a single parameter - a simple volume knob.  The amp is tube based and has two 12" speakers inside of it.

Using the Vox AC30 Brian May is simplier than any other amp that I've seen, as you've only got the master volume knob to control.  However, for me this hurts more than anything as it makes the possible tones very limited.  The sound is a good one, but I really like having other tone parameters so that I can customize my sound - with the Brian May AC30, if you don't like the sound of the amp, there is nothing that you can do to change it whatsoever.  I don't think I've ever seen an amp with so little control, and I don't really understand why they did this.  Unless you're having technical problems, a manual isn't necessary in any situation...

While the inherent tone of the Vox AC30 Brian May is clean and sounds quite good, not having any parameters to work with really hurts the versatility of the amp, as it really doesn't have any!  I've used the amp with a Fender Telecaster and a few effects like a Tube Screamer and Big Muff, and without pedals to control your sound, I really don't know how anyone could use this amp.  I understand that it is a limited edition Brian May custom, and there is definitely some value in that, but not having any parameters really hinders the overall usefulness of the amp.  Having said this, the sound that you can get with the amp is definitely awesome.

While they no longer make the Vox AC30 Brian May, it wouldn't be an amp that I would recommend anyway.  It is the type of amp that you want to try out once or twice to see what all of the fuss is about, but definitely isn't something that I would want as my main amp or even a main stay in my set up because of the lack of versatility.  The price is pretty expensive now that they don't make them, even more so than the original AC30, which for me is a much better amp.  If you're a big fan of Brian May and Queen (like I am), I would try this amp out if you come across it, but it definitely isn't worth buying one of these at all...