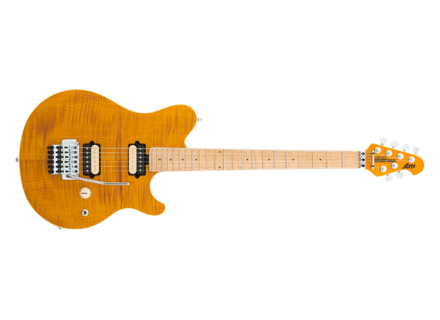 Acheter ce produit neufVoir tous les prix >
Voir les autres avis sur ce produit :
Afficher la traduction automatique
Afficher l'avis original
The Music Man Axis is the evolution of the original EBMM Edward Van Halen model that was built during the early-mid nineties. After Ed left the company and went to Peavey the EBMM model was changed slightly and renamed the Axis. It remains in production to this day and is a great selling guitar for the company. It's made in the USA Music Man plant as they always have been.

The guitar features a basswood body, a flamed or quilted maple top (available in a variety of colours both solid and translucent), a maple neck and fretboard with a really cool asymmetrical neck carve and a slightly smaller nut width than the majority of modern guitars. It features a locking tremolo system, Schaller locking tuners, two DiMarzio custom pickups (based on the Tone Zone and Air Norton I believe) and an extremely simple control layout of a volume control and a 3 way toggle switch. It also has a nice Music Man hard case with it as new.

The guitar is fairly ergonomic. Edward Van Halen is a player known for jumping around and moving with his guitars and the design was his. It lacks the contouring of many modern superstrats, but it feels less like that and more like a vintage Les Paul or something - great for the more old school player. The basswood body makes for a pretty light guitar overall, but it still has a very thick and wool-y tone that's like a hyped up Les Paul meets a Strat. The upper fret access is fairly good on these guitars too due to the Music Man 5 bolt neck joint - great upper fret access.

Getting a good tone out of this guitar is pretty easy. It is built well and has a wonderful spongy and vintage vibe to the wood, so the unplugged tones are really resonant and clear. As a result, the sound plugged in is very lively and has a nice kick to it that is very brown sounding.

I've tried this guitar through a whole plethora of different amps and have come to like it through pretty much anything. It sounds very vibrant and clear even when you first pick it up and haven't yet plugged in - very cool. To me, a great unplugged sound is always an indication that it is going to sound awesome plugged in, and the Axis is no exception. The guitar is bright and snappy and has a tone that's all its own in my opinion. It's got elements of a Strat and elements of a Les Paul but the end result is a tone that stands on its own as a great sounding one for rock and fusion styles.

All in all I think the EBMM Axis is an excellent professional instrument for those players who want a guitar that is versatile and has a voice that combines the best of the Les Paul and Strat voices to create something wonderful. Sterling and the rest of the EBMM company have been committed to making high quality guitars for many years and the Axis continues that lineage. At about $1,800 new they're a great deal, but can be had for as low as $1,000 used if you look around on eBay or various forums.
L'Axe Music Man est l'évolution de l'original EBMM Edward Van Halen, le modèle qui a été construit pendant le début des années quatre-mi. Après Ed quitté l'entreprise et est allé à Peavey modèle EBMM a été légèrement modifié et rebaptisé l'Axe. Il reste en production à ce jour et est une guitare à vendre grande pour l'entreprise. Il est fabriqué dans l'usine Music Man Unis comme ils l'ont toujours été.