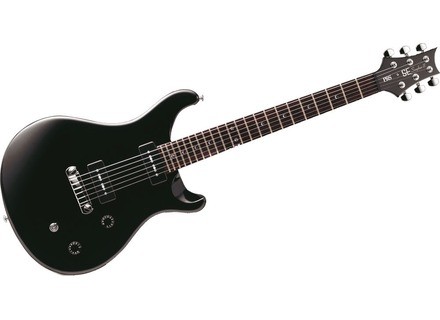 Voir les autres avis sur ce produit :
Afficher la traduction automatique
Afficher l'avis original
The PRS SE line of guitars is a great line of guitars. These guitars are helping to change PRS's Image from a super high end high priced guitar company only pros and dentists use to a guitar company that everyone can use. The SE line is made overseas but it is made to the same specs with much of the same parts that the USA made PRS models have. This is a interesting model. This is pretty much a Custom 22 with P90 pickups. I love the Custom 22 and I love P90s. I should love this guitar. This guitar has the dual cutaway prs body with the flat top. It is mahogany with a maple top. It has the traditional 25 inch PRS scale length on a 22 fret mahogany neck with a rosewood fretboard. It has PRS's wide fat neck and two PRS P90 style pickups. There is a master tone and master volume with a 3 way toggle switch that is unusually placed. The bridge is PRS's wrap around stop tail design which is pretty good.

These guitars have all the great playability of a normal PRS even though they are made overseas. The Wide-Fat neck isnt that fat. It is not like 50s Gibson fat. It is more of a normal profile compared to the wide-thin neck they put on some guitars. The fretwork is nice and even and the factory action is very good. The wrap around bridge is a great setup and matches well with the 25 inch scale. PRS guitars always seem to have better intonation than other guitars even with their seemingly simple bridge setups. On many guitars with bridges like this the intonation is bad but PRS has figured out how to design their bridges to where the design is simple but the intonation is correct. The setneck joint is nice and slim so you can play all the way up on the neck. The satin finish gives a smooth feel which is good on the neck. Again with all these PRS models I hate how far away the pickup selector is. I wish they would put them closer to the rest of the controls.

P90s are my favorite vintage pickups. You can do just about any music with a set of P90s if you really try. The P90 has a pretty cool tone on its own and it comes out well on this guitar. The P90 single coils give you a nice crisp top end but unlike Fender single coils they have the balls in the low end to fill out the sound. You get the twang but the twang has a good thick bass to it to keep it from sounding harsh. So you get a thick full sound with the single coil clarity up top.