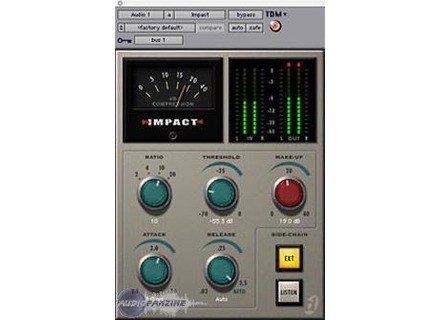 Rapport qualité/prix : Correct
Voir les autres avis sur ce produit :
Afficher la traduction automatique
Afficher l'avis original
This is a pretty easy plug-in to install when you do get it. The manual pretty much tells you everything you need to know, quickly and easily. The general setup is really simple, it only takes a short time. Without getting too specific, if you have Pro Tools set up and have installed plugins, this is no problem for you to do. The functions that are possible with this compressor are pretty standard compression, attack, release, gain, ratio, etc.

I have yet to really have a problem with this plug-in in particular. I have noticed that when I use it with other, more problematic plug ins, it tends to slow down my Mac quite a bit. This is mainly because I'm using it in LE on a Macbook Pro. I've used it in full studio Pro Tools rigs where it worked just fine alongside almost any other plug-ins. I think it was mostly the fault of the other plug-ins, as I can use this one on a multitude of tracks on the same project. So in terms of performance with my setup, it's pretty great.