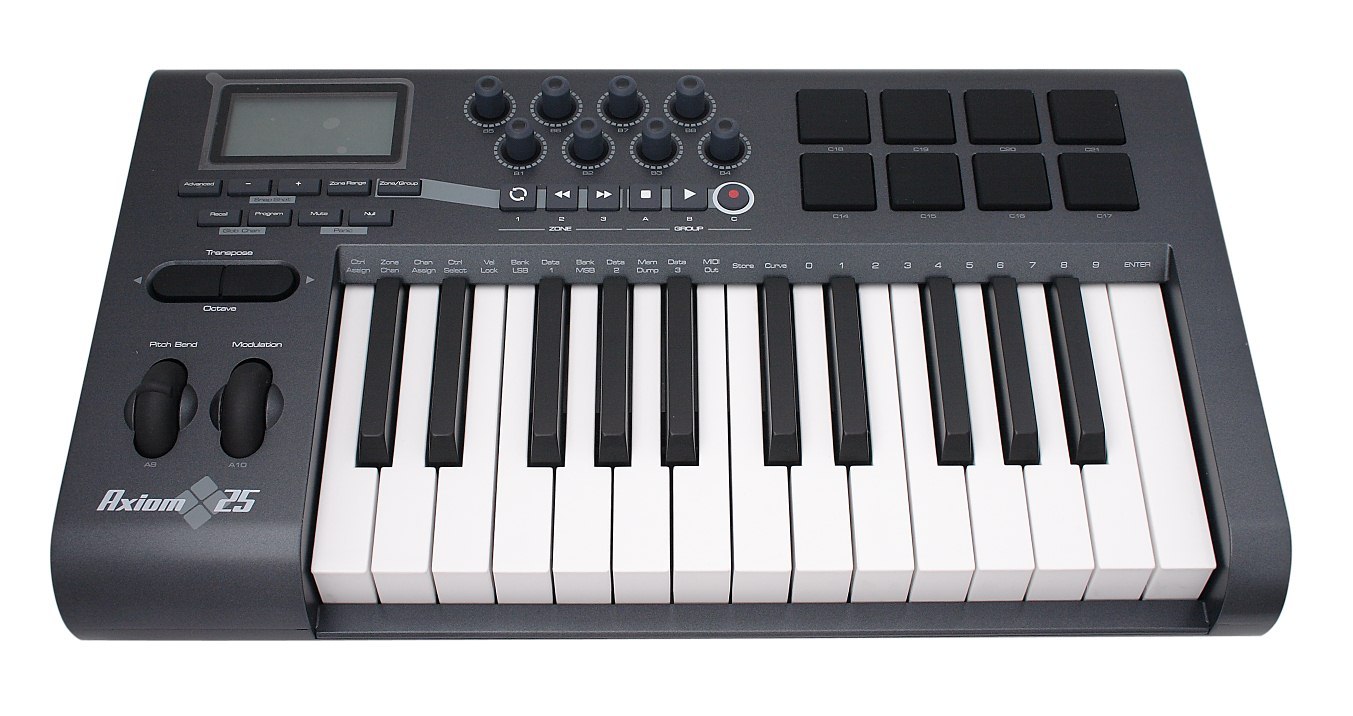 (contenu en anglais)
Afficher la traduction automatique
Afficher l'avis original
The M-Audio Axiom 25 is a MIDI controller that like the name states, has 25 keys. As far as it's connections go, it's got a USB port, which can provide power, as well as a MIDI input and a MIDI output. It also has 1/4" connections for sustain and expression pedals, and for a power supply if you aren't using the USB port. It's a very complete MIDI controller, with just about all of the parameters and control that you'd want from a MIDI controller.

It didn't take too long for me to get used to the make up of the M-Audio Axiom 25. I do have a good amount of experience with different MIDI controllers, but even if you don't I think you'd be able to catch on pretty quickly. In addition to the 25 keys, it's got a transport section with control over your playback and record buttons, as well as both pitch and modulation wheels. It also has eight trigger pads, which to me are one of the best features on this. It then has eight programmable parameter knobs, an LED screen, an octave selector, and a variety of other parameters to control. A manual might not be a bad idea, but probably isn't necessary.

As far as 25 key MIDI controllers go, the M-Audio Axiom 25 is definitley one of the best ones on the market. It's got all of the parameters that you'd want, including the trigger pads, which are perfect for programming beats. Everything is pretty straight forward, so it isn't like it has all of this features and isn't still user friendly. While I do like the feel of the keyboard, it isn't as good as the Pro 88, although it definitely does the job fine and better than the other lower end M-Audio MIDI Controllers. M-Audio has some great MIDI controllers at very reasonable prices, and the Axiom 25 to me is one of their best...
Le M-Audio Axiom 25 est un contrôleur MIDI qui, comme son nom l'indique, dispose de 25 touches. En ce qui concerne ses connexions aller, il possède un port USB, qui peut fournir de l'énergie, ainsi que d'une entrée MIDI et une sortie MIDI. Il a également 1 / 4 "pour les connexions de soutenir et pédales d'expression, et pour une alimentation si vous n'utilisez pas le port USB. Il est un contrôleur MIDI très complet, avec à peu près tous les paramètres et le contrôle que vous voudriez à partir d'un contrôleur MIDI.