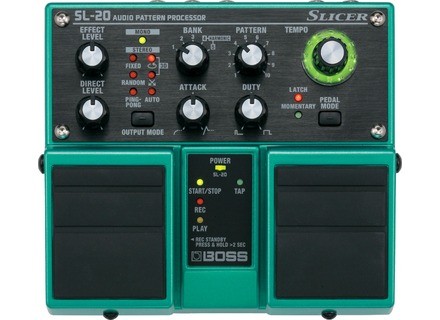 Rapport qualité/prix : Excellent
Voir les autres avis sur ce produit :
Afficher la traduction automatique
Afficher l'avis original
The Boss SL-20 Slicer is a somewhat unique and definitely unique pedal for use with electric guitar and other electric instruments. The name doesn’t give away too much, but essentially it’s a pedal that chops your sound and turns it into kind of a percussive groove. If you’re seriously interested in the pedal, check out some videos as hearing it for yourself will do better than any description. The pedal is the dual foot switch design rather than the compact pedals that most Boss pedals are. It’s got ¼” connections for inputs and stereo outputs, while it’s powered up by a nine volt power supply (or batteries). It’s not a rack mountable piece of gear.

Using the pedal isn’t too hard, but there’s a ton that can be achieved with it, so there is in turn a lot to know about. I’ve really only scratched the surface when it comes to the SL-20 as I’ve only used limitedly since I don’t own it. I haven’t delved into everything the pedal has to offer, but it’s got 50 different slice patterns with a tap tempo option, looping, and all sorts of effects. You can also do a great deal with panning with the pedal. A manual might be a good idea for new users, but I haven’t seen it so I don’t know how well put together it is.

The sounds possible with the Boss SL-20 Slicer are definitely unlike that you’ll find on many pedals out there. In fact, I can’t really think of any other pedals that can do quite what this one does. It’s a really fun pedal to mess around with and I think if you owned one, you’d be using it in a lot of songs since it can really add a lot. For me, it’s not the kind of effect I’d be using very often at all, but it’s certainly cool to have around in the studio.