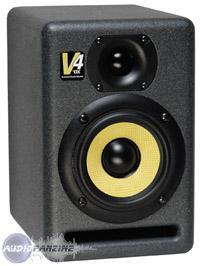 (contenu en anglais)
Afficher la traduction automatique
Afficher l'avis original
The KRK V4s are an active set of studio monitors on the smaller side. Since they are active monitors, they don't require an external power amp. Since they are on the smaller side, they are great for small or home studios or for someone who needs to move their studio around. They have an awesome look to them and are definitely a distinct brand of studio monitors.

The sound quality of the KRK V4s is very good, especially considering how small they are, meaning that they give off a big sound for such a small size. The stereo image is definitely satisfactory and they give off a pretty accurate sound across the board. The dynamics are respected and they have a pretty good lo mid, middle, and high end response for the most part. Their main flaw comes in the fact that since they are so small, they don't have a great low end response in their sound. For this reason, they are probably best suited for monitoring or A/Bing, rather than mixing.

I've been using the KRK V4 studio monitors for about two years and have found them to be a helpful set of monitors that are great for home studios. While I wouldn't recommend mixing on these, as the low end response is not enough for my taste, they are great for checking mixes or simply for monitoring on. The price of these is the best part as they are extremely affordable for home studio owners. KRK is known for making some great sets of studio monitors, and they KRK V4s are some of their most popular monitors. These aren't designed for professional mixing, or even close to it really, but they are great at what they do. Overall, these are worth a look for home studio owners.
Le KRK V4S sont un ensemble de moniteurs de studio actifs sur le petit côté. Comme ils sont des moniteurs actifs, ils ne nécessitent pas un ampli de puissance externe. Comme ils sont sur le petit côté, ils sont grands pour les petits studios ou à la maison ou pour quelqu'un qui a besoin de se déplacer dans leur studio autour. Ils ont un super look à eux et sont certainement une marque distincte de moniteurs de studio.