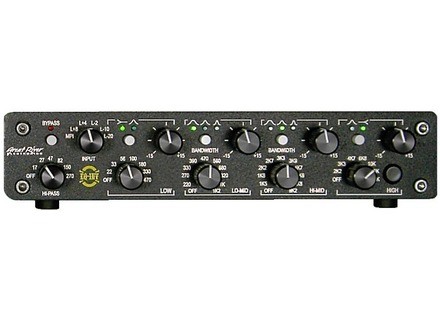 Afficher la traduction automatique
Afficher l'avis original
The Great River EQ-1NV is a single channel, four band equalizer with an addition high pass filter. The EQ is made up of all analog parts, and has 1/4" TRS connections. It isn't a rack mountable piece of gear as it has its own shape and size that will sit on any sort of desk or table top.

If you are familiar with the way parametric EQs are set up and how they are used, the Great River EQ-1NV won't present any problems for you. Each of the four bands of EQ have the standard parameters of gain and frequency, and each also has a button to choose between a few different bandwidth settings. In addition, there is a knob to choose the high pass frequency, as well as a bypass button for it. There is also an overall bypass button and an input level knob. I've never seen the manual for this, so I can't say too much about its make up.

Like pretty much all of the gear that I've used from Great River, the EQ-1NV is a top tier sounding equalizer. It has a very full inherent tone, and does exactly what it is told in terms of sculpting your sound. I've used it for EQing vocals, snare drum, and acoustic guitar, but it's capabilities definitely range far beyond this as I do believe that it would be suitable in any situation where you might want some EQ. I find that the four bands are more than enough to work with...

I first used the Great River EQ-1NV about six or eight months ago, and I'm eagerly awaiting another chance to use this as it sounds absolutely awesome. Though pretty expensive, those who are seriously interested in something like this probably already understand that this is around the price that you're going to pay for top end quality. If you're a studio owner of any type looking to add some serious tone for equalization, look no further than the EQ-1NV.
La Grande Rivière EQ-1NV est un canal unique, quatre égaliseur avec un filtre passe outre élevé. L'EQ est composée de toutes les parties analogiques, et a 1 / 4 "TRS connexions. Ce n'est pas une pièce de montage en rack d'équipement car il a sa propre forme et la taille qui va s'asseoir sur toute sorte de bureau ou de table.