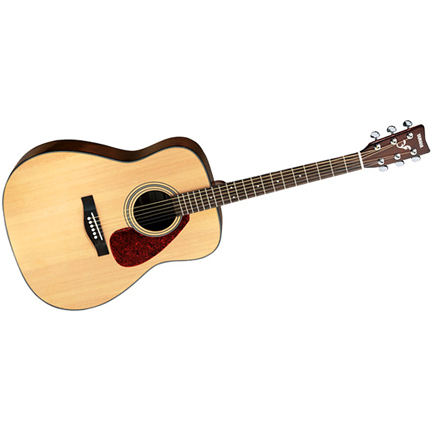 (contenu en anglais)
Afficher la traduction automatique
Afficher l'avis original
The Yamaha F 325 is an acoustic guitar designed for beginning players. However, the guitar is definitely better than your average beginner's guitar. I don't know where the guitar was made, but it's got 21 frets in total and the fingerboard is made out of rosewood. The top is laminated spruce while it's also got nato and meranti in it as well. It's not an acoustic/electric, so there aren't any pick ups or setting controls found on the guitar.

Playing the Yamaha F 325 is overall pretty comfortable. I've found it to be a pretty easy guitar to play, especially for one that is supposed to be for beginners. If you are a beginner who is looking for a guitar, it's especially important to get a guitar with playability as it's going to be the place where you form all of your habits. Having a guitar that feels good is sometimes half the battle for a new player, and you'll definitely get a nice feel with the F 325.

The sound of the Yamaha F 325 isn't really anything to write home about, but it's not awful by any stretch. It has a good enough sound to get the job done for simple playing and practicing, but it isn't the type of guitar I'd do any real recording with outside of demoing songs. It's more or less full bodied in terms of tone, but if you were to play it side by side with a higher end guitar you would notice the difference pretty quickly...