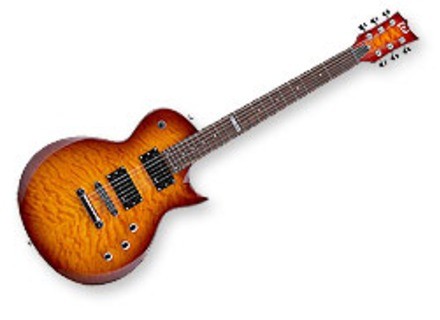 Acheter ce produit neufComparer les prix >
Voir les autres avis sur ce produit :
Afficher la traduction automatique
Afficher l'avis original
The ESP LTD EC100 is part of the lower end of guitars that LTD offers. It's meant for people who are on a super tight budget and are just starting out. It has an agathis with a quilted maple top (which I think is a veneer), a bolt on maple neck with a rosewood fretboard, 24 extra jumbo frets with dot inlays and the name at the 12th fret, a 24.75'' scale length, two humbuckers, two volumes, one tone and a three way switch.

These guitars are pretty awful. For one, they use agathis wood. This wood is a wannabe mahogany that sounds pretty muddy and dull. I'll get to that in the sounds section, however. The bolt on construction means that there is tons of room for error, and since these guitars don't have a ton of attention put into them, there are some big gaps in the neck joints in these. This hinders overall tone. The fretwork is awful, too. The edges are sharp, and the frets aren't properly leveled. This makes it pretty woeful to play every time you pick it up.

The guitar sounds dull and like ass, period. The stock pickups are awful and muddy. No matter what you EQ the amp at, it'll always sound like shit. Seriously, don't even bother replacing the pickups on this model as it most likely won't make it sound any good. Even EMGs can't save this thing. The agathis wood isn't helping it either. It's a poor man's mahogany, and it sounds atrocious. Take the worst qualities of basswood and mix that with some dullness. That's what agathis sounds like.